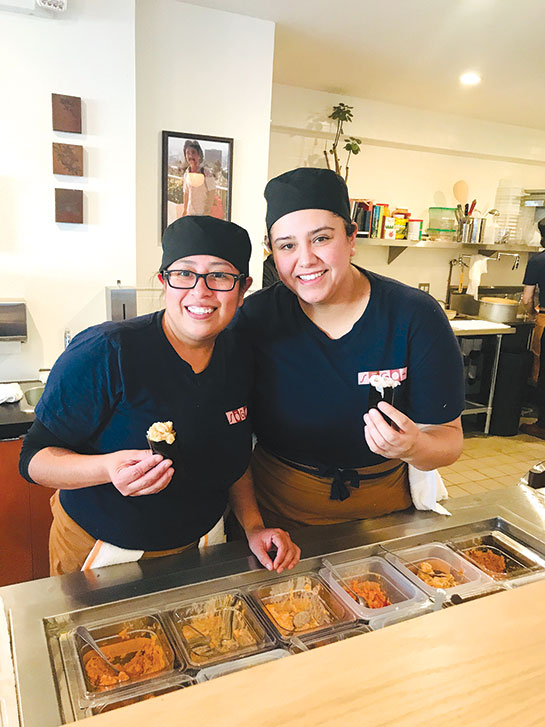 Sōgo translates to “mutual,” representing the give-and-take concept between chef and diner at Sōgo Roll Bar. (photo by Jill Weinlein)

Located in what is becoming East Hollywood’s restaurant row, Sōgo Roll Bar shares an outdoor patio next to the expanding Go Get Em Tiger coffee bar.

Inside the light and bright space are reclaimed wood floors and a light wood counter that runs the length of the room.

While waiting for a seat, I met Lancaster and learned how he has been part of the neighborhood for over a decade. He noticed a void in Japanese sushi restaurants in the area. After a soft opening serving lunch only, the restaurant is now serving dinner to locals who are returning more than once a week to enjoy the variety of unique and flavorful hand rolls, he said. 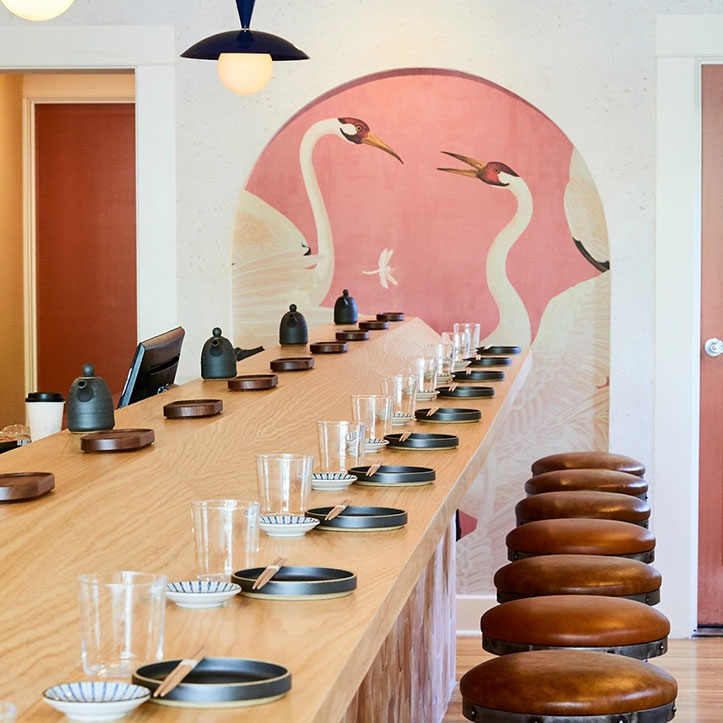 The bright sushi bar at Sogo is as inviting as the friendly faces of the servers and sushi chefs. It’s becoming quite popular on Hollywood Boulevard’s east side. (photo courtesy of Sogo Roll Bar)

Sōgo Hand Roll offers a tiered set of three to six hand rolls or à la carte items, much like Sugarfish’s concept. Guests sit back and watch their order being made right before their eyes, before being handed a roll with an explanation of the ingredients.

Rolls can be plated and cut upon request. For those in a hurry, rolls can be made fresh and ready to go in custom curated boxes.

Roll makers use two sizes of fresh, crisp nori rolled in a box-like shape so the filling stays put and doesn’t come out of the bottom. Their warm rice is enhanced with rice vinegar and topped off with a pinch of sugar and salt.

For the salmon, snapper and cucumber avocado rolls, each is intensified with a green sauce that has a citrusy yuzu zing. Our three favorites were the scallop hand roll with fresh lemon and mayo, the crab roll and the Gravlax hand roll made with sour cream, chopped wasabi root marinated in soy sauce and salmon that has cured for three days.

The restaurant is an ideal solo dining spot. A person can come, sit at the counter, order different rolls and be entertained watching the action behind the counter.

A photo of chef Saito when he first arrived in Los Angeles from Japan in the 1970s hangs in the kitchen. His goal was one day to own his own restaurant. Now, with the help of Gibbs and others, his dream has come true.

NPR takes its program onto the stage