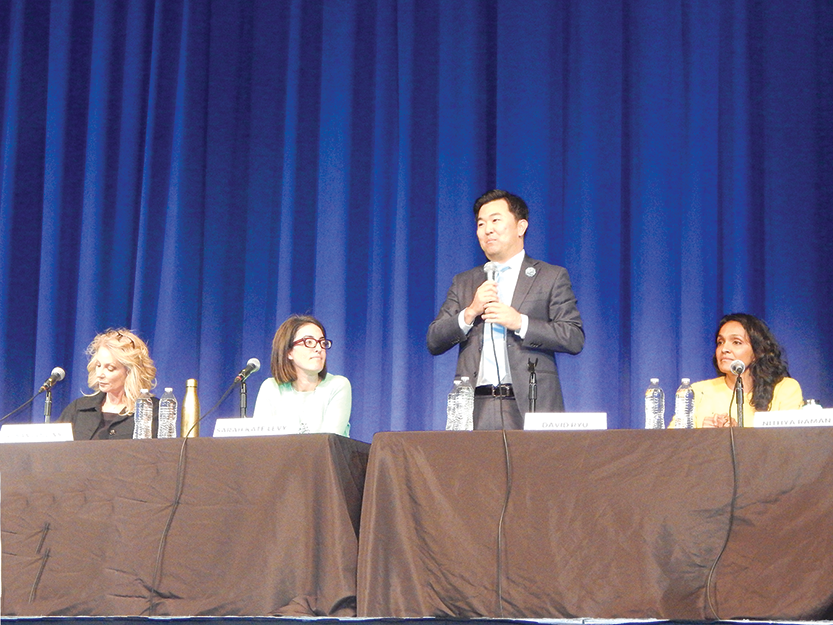 An additional write-in candidate, Eric Christie, declined to participate, but in a statement read by Denkmann he directed voters to a YouTube video on his candidacy that can be viewed by searching his name online.

The candidates outlined their vision for the 4th District, which includes a vast and demographically diverse area from the Miracle Mile and Hancock Park at its southern end, Hollywood and the Los Feliz areas in its center portion, and Toluca Lake and Sherman Oaks to the north.

The candidates agreed that homelessness is the most pressing issue affecting the district.

“I have a seven-point plan to address the homelessness crisis that addresses the root causes of homelessness by providing services to people who need it, but also as a priority, ensures the surrounding communities’ safety and security is restored,” said Collins, a realtor who is a write-in candidate in the March 3 primary election. “I want to invest in people, not in property. I want to ensure that your representation represents you and not special interests. I want to make sure our streets are clean, free from needles and garbage, and I want to empower you by implementing community outreach programs.”

Levy also outlined her plan to address homelessness, which includes safe parking lots and spaces for tents where people who are unsheltered can be linked to services.

“Homelessness is absolutely a crisis in this city and our city has failed to act as if that is the case. Homelessness in our district went up 53%, which was the largest spike in any part of our city,” Levy said. “I believe we can serve our homeless Angelenos so much better with safe parking and safe camp sites with bathrooms and showers and wraparound services in those sites. That way, we can help people more effectively while also clearing our sidewalks.”

Ryu said ending homelessness is a top priority and a “FEMA-like” response is needed to address homelessness.

“Today, we face the crisis of our time, and that is homelessness,” Ryu said. “There is not one person or one solution that is going to solve homelessness. It’s going to take all of us, community leaders, business leaders, elected officials from all levels of government working together, and that is what I have done in the past four and a half years, working all across Council District 4 with all communities to solve all of our challenges. I want to build on that progress that we have built.”

Raman, an urban planner and homeless advocate who co-founded the SELAH Neighborhood Homeless Coalition serving people in the Atwater Village, Los Feliz and Silver Lake areas, said community centers should be built where unsheltered individuals can visit and be linked with services.

“What I have found across the board is a massive gap between the rhetoric of urgency that comes out of City Hall saying that this is the most important crisis, and the reality that meets most homeless people when they are living on the streets,” Raman said. “The reality is that when people become homeless in Los Angeles, it is almost impossible for them to get off the streets. I am proposing that we transform how we provide services in Los Angeles, that we create neighborhood access centers where people have the opportunity to develop relationships of trust between case workers and people who are homeless that can actually get them off the streets.”

The candidates also addressed a question about how to create more affordable housing in the district and the pros and cons of Senate Bill 50, state legislation that would have allowed more multi-family housing to be built near transportation corridors. SB 50 was not approved by the state Legislature.

Collins said she did not support the failed state legislation.

“I was avidly opposed to SB 50, and the primary reason I opposed [it] was I feel as though it was a huge overreach,” Collins said. “Sacramento does not speak for the entire state. They cannot speak for every individual community. I am a huge proponent for ensuring that each community has as much control over what happens in their community as possible. While I agree that we can increase density, it absolutely must be done in a way that allows communities as much input and as much say on how that happens.

Levy said SB 50 had some positive elements, including that it would have allowed cities to come up with alternative solutions during the first two years.

“We have a major, major housing crisis in this city that is the result of the fact that our council has failed to act to resolve it. And that’s why Sacramento keeps coming down with plans to make us solve the problem,” Levy said. “Here are the things that I really liked about the last draft of SB 50. I like that they gave us two years to make our own plans and we can do it without Sacramento getting in our way. I liked that SB 50 protected tenants, you couldn’t use SB 50 to empty a building if people lived in it. I liked that you couldn’t use SB 50 to build in fire zones. I liked that you could have a duplex or a triplex or a fourplex in your neighborhood, because personally, I’d rather live next to a 3,000-square-foot triplex with three families living in it than a 7,000-foot McMansion with one. There is so much we could have done and I would as councilmember.”

Ryu said he was adamantly opposed to SB 50.

“I opposed SB 50 and I led the charge in the City Council to oppose SB 50. What we have in Los Angeles is not a housing crisis, what we have is an affordable and moderate income housing crisis,” Ryu said. ”SB 50 failed to have enough inclusionary zoning for affordable housing or moderate income housing. It failed to protect existing affordable housing stock. It failed to protect renters. It’s not trying to work with us. A two-year moratorium to tell us to do what they want us to do is not working together.”

The candidates outlined their viewpoints on making streets safer for pedestrians and cyclists while improving transportation.

“I think every day about the people who are dying in our streets,” Levy said. “District 4 has a lot of high-injury network locations in it and we need to do way more to slow traffic on our streets, to make our streets friendlier to cyclists, to build out protected bus lanes. For me that means rebuilding our infrastructure to say we prioritize people and going safely across our city, more than we prioritize people flying down our roads.”

Ryu added that safety on city streets is also a priority.

“I fully support the city of L.A.’s Vision Zero plan (which seeks to eliminate all deaths on roadways by 2035), and we, the City Council, have made it a priority for funding and execution. I am committed to making L.A. safe for all,” Ryu said. “Whenever we have issues with safety, I want to make sure we work with the experts. And when it comes to safety and all of our streets being safe, whether it’s sidewalks, whether it’s additional lighting, streetlights, bike lanes, bollards or continental crosswalks, I use every tool in my arsenal to make sure we make it safe for pedestrians, for cyclists … and making sure our community is walkable.”

“We have plan after plan at City Hall that talks about safer streets. We have a bike plan from 2010. We have a first/last connectivity plan from Metro that talks about getting pedestrians and bicyclists to train stations. We have a Mobility Plan 2035 that also talks about building out a network of protected bike lanes throughout our city,” Raman said. “Yet, over and over again, these plans go unimplemented. Council members from across this city have simply not built these plans out, and this is because every time we take road space away from cars, a small majority of voices speaks out against that. The majority of us want better. That’s why I am excited about this election, because so many people are going to vote in this election. We can say we want to take back our streets.”

Collins said she hopes to take a cautious approach to transportation projects that can significantly alter communities.

“I absolutely support and would thoroughly enjoy a more walkable city,” Collins said. “But I am also aware that it’s not appropriate for every area and every neighborhood. And I don’t think we can have a serious conversation about reducing our carbon footprint while also increasing situations that increase gridlock and anxiety, and with that gridlock comes a greater carbon footprint. We have to be realistic. We have to implement protected bike paths and walkability in communities where it’s appropriate.”

The candidates also all agreed protecting the environment and creating more greenspace and parks in neighborhoods are priorities and vowed to pursue those goals.

The candidates said they will continue speaking with community members throughout the district leading up to the March 3 primary election and encouraged constituents to visit their campaign websites and reach out with specific questions. If any one of the candidates fails to obtain 50% of the vote on March 3, the two who receive the most votes will compete in a runoff in the Nov. 3 general election.