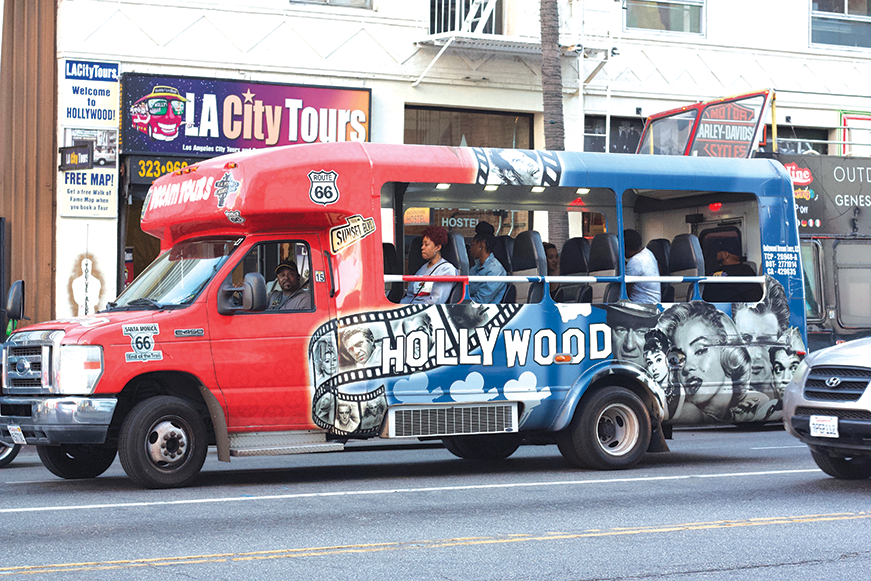 Tour buses are a frequent sight around Hollywood Boulevard. (photo by Jose Herrera)

The Los Angeles City Council voted unanimously to pass a new law on Feb. 25 that allows the Department of Transportation to designate and restrict on which streets tour buses can operate.

Additionally, a series of escalating fines for violating the law have been laid out in the ordinance.

“For far too long, unscrupulous tour bus operators have been putting their passengers and the public at risk by driving up narrow hillside roads that weren’t built for heavy vehicles, making illegal U-turns and allowing passengers to hop on and off behind blind curves,” said Councilman David Ryu, 4th District.

The new law will allow the LADOT to study road width, crash patterns, visibility and other factors in determining whether a street is safe for tour bus operations. Streets determined unsafe will have new signs barring tour buses.

The law will take effect in April, after Los Angeles Mayor Eric Garcetti signs it.

It took a few years and a change in state law before anything could be done about tour buses in Los Angeles. Assemblyman Adrin Nazarian (D-San Fernando Valley) authored Assembly Bill 25, which authorized local jurisdiction to place restrictions on tour buses such as their access to streets and prohibiting the use of loudspeakers on buses without roofs.

Many residents and city officials wanted to create tour bus regulation for the last two decades but were unable to because the state law did not allow local tour bus ordinances until AB 25, Ryu said.

“What AB 25 did was give the ability for the city of L.A. to carve out these rules,” Ryu said. “Once that got passed, we worked with the department of transportation, the city attorney’s office, office of tourism and everyone else to figure out how we could come up with tour bus regulations.”

Many tour bus operators have been willing to comply, but some smaller and more unscrupulous companies often park behind blind curves, allowing passengers to exit when its unsafe and violate traffic laws and regulations, Ryu said.

Ryu, whose district includes Hollywood, has heard from constituents about the many dangers and hazards that tour buses have created on narrow hillside streets.

“We had no way to stop them and keep people safe. After years of working with the state and working with the city, we are finally bringing some commonsense safety to this industry,” Ryu said.

The tour bus law was seven years in the making, according to Anastasia Mann, president of the Hollywood Hills West Neighbor­hood Council. For years, her neighborhood has faced issues dealing with traffic violations, fire hazards, privacy and residential rights, but recently due to the proliferation of tour buses going up and down the hillside things have escalated.

“The reality is that the quality of life issues and safety on the street have been trounced upon over and over again,” Mann said.