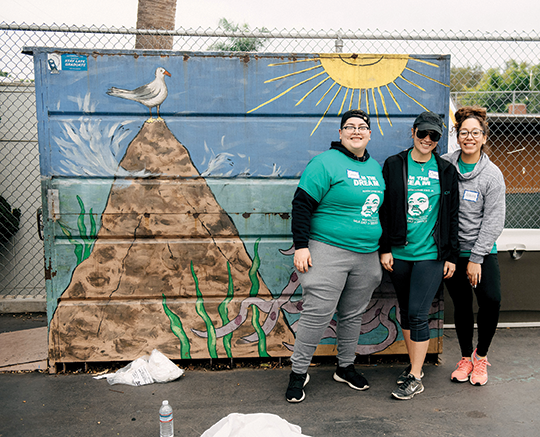 In one corner, Amanda Benites and other members of the Kiwanis Club were raking and collecting leaves.

“I think by doing this, we’re just improving our community and making it a better place for our next generation,” Benites said.

Other volunteers worked on updating faded murals, cleaning the auditorium, planting drought-resistant gardens and power-washing playground equipment, with many parents and students working together.

“I think because [students] participate and see their parents participating, they see an example of service and community that establishes philanthropy of their own,” said Annabeth Gish, whose son attends the elementary school. “As a mother, it’s important that we impart that this isn’t just their school, this is a part of their community.”

Members of the West Hollywood City Council used the event as an opportunity to speak with the students who came to volunteer.

“Every year has been an opportunity to make a difference, not only to beautify the school but to be invested in it,” Mayor Pro Tempore Lindsey Horvath said. “It’s an important day for everyone to be together.”

Principal Elizabeth Lehmann said the day of service facilitated by city staff leaves a positive impact on her students.

“My hope is when the kids come and see how much has changed at their campus, that they will feel invested in by the city,” Lehmann said. “That goes a long way because if you feel that way, you want to do that much better in your studies.”

In addition to the improvements made during the day of service, the yard was prepared for two new murals featuring children and science-related elements. The murals, designed in partnership with the West Hollywood Arts and Cultural Affairs Commission, will be installed in the yard in the coming weeks.