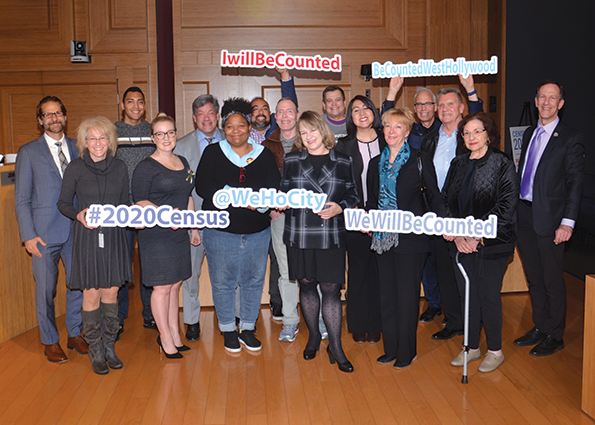 On Jan. 21, the city of West Hollywood officially launched its “Be Counted West Hollywood” countdown campaign to Census 2020, which will take place on April 1.

The city’s efforts aim to mobilize community members to take part in the upcoming census and to educate residents and stakeholders about the importance of participating in the census and returning the questionnaire.

The United States Constitution mandates that a complete national population count be conducted every 10 years.

“The census provides critical information,” West Hollywood Mayor John D’Amico said. “A complete count will help to ensure that West Hollywood receives a fair share of federal funding and investments and, on a state level, the count will determine California’s apportionment in the U.S. House of Representatives. It’s so important that people in our community take part and be counted.”

To ensure that every resident of West Hollywood is counted during the Census 2020, the city is inviting community members to become ambassadors, an essential part of the City-Census 2020 engagement campaign to ensure a complete count. Ambassadors will volunteer their time by disseminating information across the community to ensure everyone is engaged and knowledgeable about the Census 2020. Ambassadors are encouraged to engage and inform their respective constituents and social media audiences in a way they feel most comfortable.

Ambassadors must either live, do business or have strong affiliation with the city of West Hollywood; be willing to receive information from the census or the city, and share this information with the public. Interested stakeholders are encouraged to send an email to Hernan Molina at census@weho.org with their name, address, phone number and preferred email address.

The nonpartisan Legislative Analyst’s Office in California has estimated that during the 1990 Census, California’s population was undercounted by 2.7%; this undercount likely resulted in California receiving at least $2 billion less in federal funds.

There are, however, other impacts beyond reduced financial resources: according to the LAO, the 1990 Census undercount was severe enough that California was shortchanged one congressional seat.

Census staff has projected, based on data from the 2010 Census and from regular surveys, that certain West Hollywood census tracts may have a moderately low response rate.

As a community of just 1.9 square miles, the city of West Hollywood will work diligently to achieve a complete census count in Census 2020.

American Pickers on the hunt for California collections