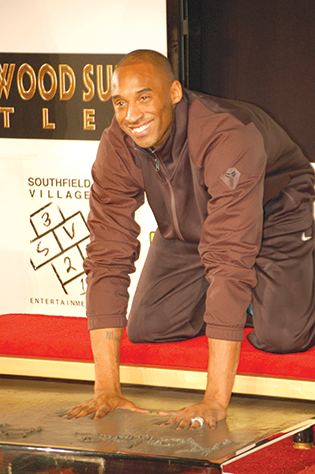 In the Feb. 24, 2011, issue of the Park Labrea News and Beverly Press, NBA and Los Angeles Lakers legend Kobe Bryant was pictured placing his handprints in cement during a ceremony at the Grauman’s Chinese Theatre. Bryant became the first athlete to have his handprints and footprints enshrined in cement at the theater, an honor generally reserved for actors and members of the film industry. He was joined at the ceremony by actress Penny Marshall, actor and comedian George Lopez, television host Jimmy Kimmel and former Lakers coach Phil Jackson. The ceremony coincided with the NBA All-Star Game, which was held at Staples Center that year.

Fans around the world are commemorating Bryant, who died on Jan. 26 in a helicopter crash in Calabasas that also claimed the lives of his daughter Gianna and seven others. Los Angeles Mayor Eric Garcetti ordered flags flown at half-mast at government buildings throughout the city on Jan. 27, and Los Angeles City Hall was illuminated in purple and gold as a tribute to Bryant.