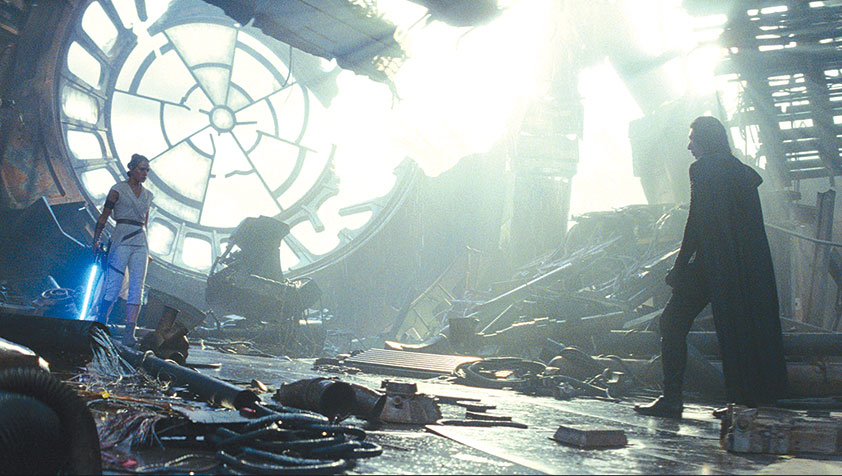 Online discourse amplifies a whole lotta complaining, from “The Last Jedi” haters to alleged real fans whose childhood memories are “ruined” by the Disney “Star Wars” film lot. Yawn. The galaxy far, far away weathered George Lucas’ abysmal prequels and will find a way into our hearts once more, even if the final chapter of the “Skywalker” saga fizzles out.

Instead of following the path set by “The Last Jedi” (because $1.3 billion at the box office wasn’t good enough for the House of Mouse), part nine retcons much of the film. Rey’s (Daisy Ridley) parentage matters after all and Rose (Kelly Marie Tran) moves to the background (a victory for everyone who harassed her off social media).

Mild spoiler here: Leia (side note: Carrie Fisher’s sendoff is the best it could be considering her tragic passing) apparently trained to be a Jedi a long time ago, a throwaway moment to appease internet trolls who whined about her flying in space (the idea that a Force wielder at death’s door can tap into latent powers and pull herself, not fly, with the Force to safety is just too hard to believe … I wonder what they thought about “Return” when the Emperor shot lightning at Luke).

To be fair, retconning isn’t a new addition. Lucas sabotaged his own work multiple times (i.e., “Han shot first”). In “New Hope,” Kenobi describes Anakin as a younger pilot when they first met. Clumsily flying a Naboo fighter apparently fits the bill. Then Luke and Leia kiss in “Empire,” prior to their twins reveal. And the “Clone Wars” animated series brought Darth Maul back to life, acknowledging his punk death in “Phantom Menace.” So, J.J. Abrams revising the past is merely proof Lucasfilm needs to master plan.

If “Force Awakens” was a hypercopy of “New Hope,” then “Rise” is the ultimate homage to 42 years of franchise history. It tries to do so much, too much. Keri Russell’s Zorri Bliss appears for a hot second to provide Poe (Oscar Isaac) a love interest before she exits. And Emperor Palpatine (Ian McDiarmid) is back, doing his best Anjelica Houston impression circa “Captain EO”: A deeper voice, more Borg than Sith, and barely in the film.

He’s been pulling the First Order’s strings the entire time, adding little to the story beyond name recognition and a conveniently powerful foe. Come the final showdown, what transpires is less exciting than his duels with Jedis or torture of young Luke. Instead, he’s a cartoon villain spewing cliches.

Abrams hides a lackluster, sloppy story behind amazing set design. One problem: he doesn’t go to his stories; they come to him. The same corny jokes he used in both “Star Trek” films appear here. His love for loud rather than perhaps big and still nuanced action (i.e., “Avengers: Infinity War”) is all too numbing.

John Boyega stars as Finn (left) and Oscar Isaac as Poe in “Star Wars: The Rise of Skywalker.” (photo courtesy of Lucasfilm)

Beyond how “Rise” gives the middle finger to director Rian Johnson and “Last Jedi,” it fails on its own. Sure, Abrams eventually includes some standout scenes, like Kylo Ren (Adam Driver) and Rey’s saber battle. Even Finn (John Boyega) finally becomes the soldier and strategist he should’ve been the whole time. In bits and pieces, “Rise” can be fun.

But the finale is painfully unsatisfying, complete with an incoherent space battle. Remember the Starkiller Base from “Force Awakens?” The last Sith Lord commands a fleet of old school Star Destroyers with Death Star caliber weaponry. Derivative yawn. And the Knights of Ren first referenced two films ago finally arrive, only to do absolutely nothing. They’re just masked henchmen.

Abrams clearly cares about this material, but that doesn’t mean his choices work. Like Zack Snyder’s adaptation of “Watchmen,” something can work incredibly well on paper, but the soul still might be gone. “Rise” lacks spirit. It feels so bound to the original trilogy that it doesn’t embark on new ground.

“Empire” blew the story wide open, as did “Last Jedi” (for better or worse, depending on the viewer), while “Rise” prefers nostalgia and pandering. That’s not effective art. It’s safe. And “Star Wars,” a breakout hit amid a sci-fi subgenre of B movies, was a risk that paid off. The greatest lesson of “Star Wars” should be to take a chance, not cave to fan service. At least Disney+’s “The Mandalorian” is amazing.