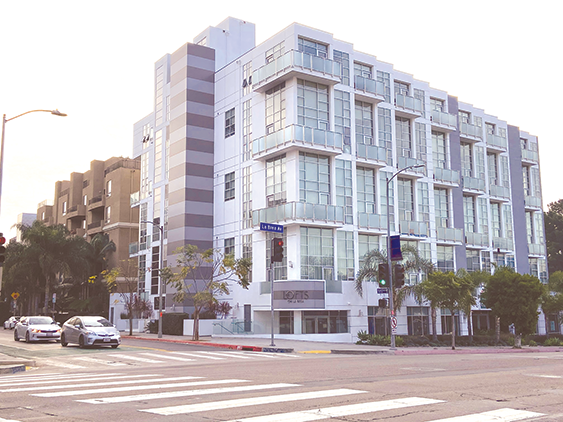 Two men were shot and injured after an altercation in a hallway at an apartment building at the corner of La Brea and Hawthorn avenues. (photo by Edwin Folven)

Hollywood Division detectives are investigating a shooting in a La Brea Avenue apartment building on Jan. 11 that injured two men in their 20s.

Police received calls about shots being fired at approximately 12:30 p.m. in the building at 1616 N. La Brea Ave., at the corner of Hawthorn Avenue, one block south of Hollywood Boulevard. They arrived to find one man suffering from a gunshot wound to his arm and another who had been shot in the leg. The victims were taken to a hospital and are recovering.

Det. Paul Hendry said a motive for the shooting has not been established and added that it does not appear to be gang related. The shooting occurred in a hallway and the victims were visiting someone in the building, he added.

“[The investigation] is ongoing. We are working it and have some good leads,” Hendry said. “There were multiple shooters. Basically, the two victims and the suspects were in a hallway, and they had an altercation that led to a shooting.”

Authorities are searching for three men described as black and in their early to mid-20s. The suspects fled in a four-door sedan.

Hendry said detectives have located security camera footage that is being used to identify the gunmen. The shooting is not believed to be linked to any other crimes in the area.

“If anybody knows anything, have them call me,” Hendry added.