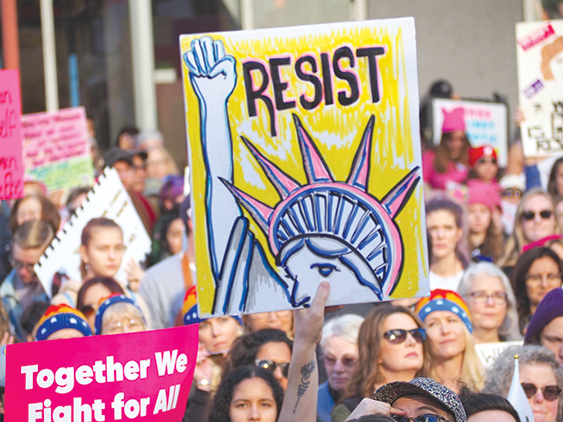 Demonstrators at the Women’s March L.A. last January took a stand on equality and human rights. (photo by Luke Harold)

The Women’s March Foundation has announced that the fourth annual “Women’s March LA: Women Rising” will be held on Saturday, Jan. 18, in downtown Los Angeles.

“In 2020, women will rise to power and demand justice for people of all genders, ages, races, cultures, political affiliations, disabilities and backgrounds,” said Emiliana Guereca, president of the Women’s March Foundation. “Following the 2016 election, women took to the streets in historic numbers to make their voices heard. Now, this election year, we will once again raise our voices at the fourth annual ‘Women’s March LA: Women Rising’ to demand that the United States’ next president have a clear agenda to advance women’s rights.”

The march is anticipated to include artists, activists and community leaders. The goal is to create unity in understanding that women’s rights are human rights, and vice versa, Guereca said.

In the 2018 midterm election, a record-breaking 103 women were elected to Congress and have worked in many areas from the economy to foreign policy and government accountability. The Women’s March L.A. will celebrate the female leaders and their accomplishments, and raise awareness about the work being done by community organizations in registering and educating voters, mobilizing communities, equipping youth for civic engagement and empowering women to run for office.

The Women’s March on Jan. 21, 2017, was the largest single-day protest in U.S. history, with over 7 million women and allies marching throughout the world. Approximately 750,000 of those calling for gender justice and equality marched in Los Angeles. The Women’s March Foundation was founded during that initial event and has organized a march for women’s rights in Los Angeles every year since, with over 1.8 million marchers participating.

The Women’s March L.A. is an inclusive, nonpartisan march, and everyone is welcome. Speakers and the march route will be released soon. For information, visit womensmarchfoundation.org.