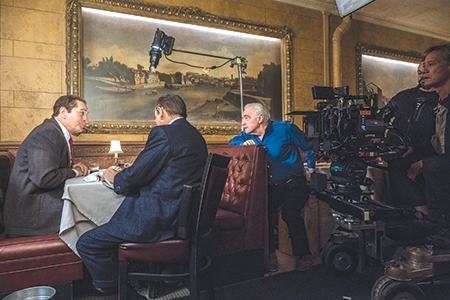 Martin Scorsese, right, speaks with Robert De Niro on the set of “The Irishman.” (photo courtesy of Netflix)

Director Martin Scorsese and actor Robert De Niro will hold a 45-minute discussion followed by a screening of their latest film, “The Irishman,” at 6 p.m. on Saturday, Jan. 4, at the Egyptian Theatre.

The film is told through the eyes of World War II veteran Frank Sheeran (De Niro), a hustler and hitman who worked alongside some of the most notorious figures of the 20th century.

Tickets for the event are sold out. A standby line at 3:30 p.m for tickets refunded by guests who can’t attend.

Kindle the holiday spirit at ‘Lights On at LACMA’