The decade in film, according to my questionable life choices

I live cinema, bathing in each edited moment, filmed beautifully, expertly performed on intricate sets. And as the decade concluded, I wished I saw more, learned more, experienced more in unique multiplex locales. All that remains is a subjective point of view that processes this massive film medium.

What follows is not a cumulative list of the best 15 films of the decade but those that affected my life thanks to their own brilliance coupled with my experiences, present and long past. Rather than a snapshot of everything, this is the decade, according to my imperfect, incomplete self.

Sure, “The Witch” moves slow, even at an hour and a half, but when Satan softly tempts Thomasin (Anya Taylor-Joy) to “live deliciously” as one of his harem in the film’s final moments, chills of dread washed over me. I never learned anything like this in seminary, and I took a directed study on horror films and theology (I’m not kidding).

What would happen if a Zuckerberg-Jobs billionaire mined all your data to create AI? Writer-director Alex Garland (writer, “28 Days Later,” “Dredd”) imagines a world of unfettered billionaires (so far-fetched, right?) and the violent rise of their creations. May we never take for granted all that free data we (sometimes unknowingly) give tech giants, which they use to sell us trinkets on Amazon, targeted fake news on Facebook or sexbots with hearts of indifferent aggression.

Prior to raising twins, I frequently visited a friend nearby to enjoy very dumb fun. In particular, we turned bad movies into drinking games. On-screen death, drink. Corny one-liner, drink. Dramatic monologue whilst staring into the horizon, waterfall.

Creating the rules was more fun than following them, but one film ascends the rest because it wasn’t terrible at all: Indonesian martial arts actioner “The Raid.” The rule that did us in: any time something awesome happens, drink. Oh boy, the first fight sequence prompted a dilemma: revise the rules or do like Macbeth and fully commit to a doomed cause. 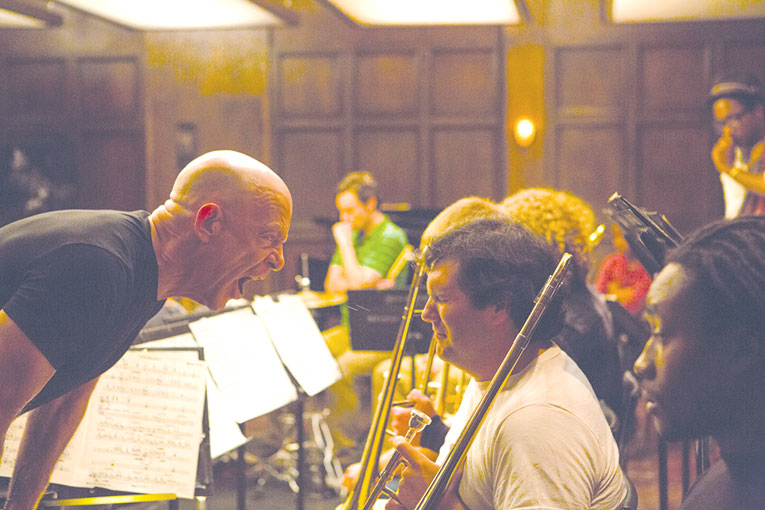 J.K. Simmons portrays a drill sergeant of a conductor in “Whiplash,” a film about the tough road to becoming a top-notch musician. (photo courtesy of Sony Pictures Classics)

J.K. Simmons’ award-winning performance as a verbally abusive jazz ensemble director hits way too close to home. I weathered two such egomaniacs in high school band when I planned to be a professional musician (that didn’t pan out, but my boys quite enjoy my ukulele skills). So much rage and frustration cursed the conductor’s chair. That finale provides a complicated dance between a student’s resistance and that instructor’s wretched behavior.

When Apollo Creed’s son rests between rounds, and Rocky (Sylvester Stallone) interrogates him on what he has to “prove,” our protagonist provides a crushing answer. “I’m not a mistake,” declares Donnie (Michael B. Jordan), the product of Apollo’s infidelity who would be adopted by widow Mary Ann Creed (Phylicia Rashad). Holy feels, Batman.

“The Perks of Being a Wallflower”

Finding your people, confronting trauma, feeling the wind in your face while good music accents a car drive, experiencing the wonder of a “Rocky Horror Picture Show” midnight screening. “Perks” is an anthem of a generation wrapped in a semi-indie flick both culturally relevant and devastating.

The modern superhero film era owes much to Fox’s “X-Men” franchise. It’s a canonical mess, but at the very least it birthed Hugh Jackman’s Wolverine, and this Oscar-nominated sendoff set in a dystopian Western drips with emotion and raw energy. “Logan” (one of my sons’ namesake) is the most brutal family film of the decade.

Forget “Frozen” or any of the “Toy Story” sequels. The charm and catchy tunes of “Moana” only grow with each viewing. Contrary to ridiculous reviews that this one lacks substance for older viewers, its themes, lore, performances and execution are pitch perfect and prove the most re-watchable. I should know; my kids love it, and we throw it on at least twice a week. It never gets old.

“Scott Pilgrim vs. the World”

I entered college dead set on becoming a musician and starting an emo band. I soon found that like Scott Pilgrim (Michael Cera), my interests would take me a different way, but love for a good song remains. And in this film, one of the many great moments occurs when dueling bands project airwave creatures – dragons vs. a gorilla – to represent each artist’s command of music. It might not make sense, but that’s to be expected from this comic book adaptation that combines romance, comedy, action, musical, Bollywood and superhero genres in a film that plays like a video game.

My wife is a saint. When “Infinity War” was released on video, I became a 10-year-old again, watching “Aladdin” every day. Spider-Man (Tom Holland), Doctor Strange (Benedict Cumberbatch) and the Guardians of the Galaxy confronting Thanos, while the Black Panther (Chadwick Boseman), Winter Soldier (Sebastian Stan), Cap (Chris Evans) and Black Widow (Scarlett Johansson) hold off an army of Outriders. One problem: I’m a grown man, a father, who shouldn’t be throwing on the same single film this much. Like I said, my wife’s a saint.

“The Cabin in the Woods”

I have an unhealthy obsession with horror films. My own dull neighbors don’t decorate for Halloween while my house drips with the living dead. So of course, horror-comedy “The Cabin in the Woods,” in all its marvelous absurdity, deserves top honors. I mean, a pothead saves the day with his trusty metal bong, derivative horror plots occur thanks to chemicals in the air that replace human agency with Jungian archetypes, and even Sigourney Weaver appears during an insane third act that pays tribute to every kind of horror monster: strangers in masks, undead creatures, cursed entities, enormous beasts, witches, clowns, robots, aliens and even a merman.

“Spider-Man: Into the Spider-Verse”

Yes, this is my third superhero film on this list. What of it? In 2016, I earned a Ph.D. in cultural studies, writing about modern superhero film and television. If only this gem arrived a couple years earlier. It supports one of my central arguments: as the superhero genre grows, it no longer feels obliged to cater to mass audiences, instead embracing grand spectacle more acceptable to an already initiated fandom. “Spider-Verse” doesn’t have time for casual viewers, instead unfolding for those who want to know more about how unique comic book stylizations and narratives can become. In short, it’s the prettiest film of the decade.

It’s a 133-minute response to decades of jokes about a massive battleship’s enormous design flaw. That vulnerability in the Death Star isn’t luck or manifest destiny but a coordinated effort to bring down the Empire. Few modern “Star Wars” moments made me fanboy out more. And then a “Dirty Dozen” finale and a Force-sensitive character solidly played by legendary Donnie Yen repeating, “I am one with the Force, and the Force is with me,” amount to very satisfying cinema indeed.

“Take her to the moon for me,” says an imaginary friend before he disappears into a young girl’s forgotten memories. I ugly-cry for Bing Bong and my own lost youth, but the cycle of life continues in my boys, who face off against their own growing pains, negotiating joy, sadness, fear, anger and disgust, that last one normally in the form of Costco samples they tend to spit out onto me. 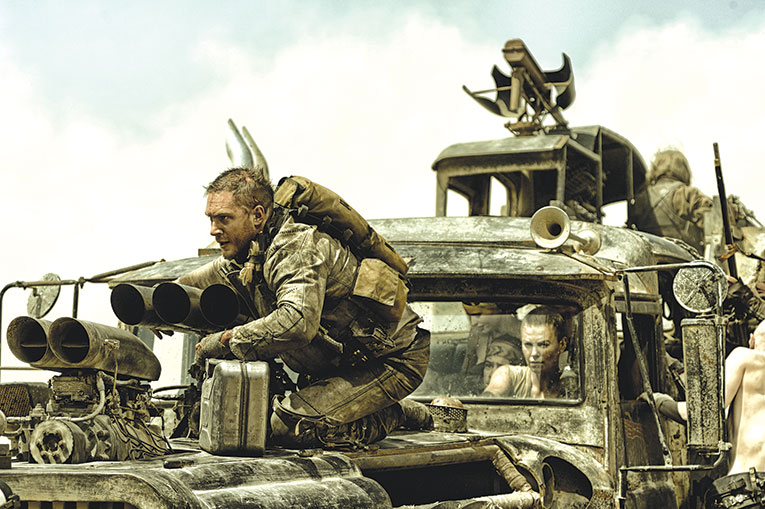 Tom Hardy stars as the title character in “Mad Max: Fury Road,” one of the author’s favorite films of the last decade. (photo courtesy of Warner Bros. Pictures)

I can’t confess an overwhelming love of George Miller’s dystopian trilogy, but the new one seemed at least intriguing as a piece of film history. Until this one, I understood the world around me. Then I witnessed an Aussie performance artist rocking a double-necked guitar accented by a flamethrower and suspended in the air by bungee cords. My life goals feel so insignificant in the presence of such mighty iconography.