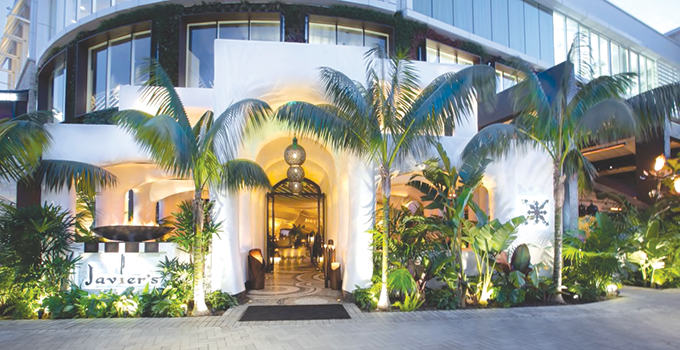 An argument between patrons at Javier’s restaurant at the Westfield Century City mall escalated into a fight and shooting outside the mall that left one man dead. (photo courtesy of javiers-cantina.com)

A fight that began in a restaurant in the Westfield Century City mall on Jan. 20 resulted in a shooting that left a 28-year-old man dead, and police are searching for a male suspect.

Authorities from the Los Angeles Police Department’s West Los Angeles Division received a call at approximately 10:15 p.m. about a fight in Javier’s restaurant and were responding when a second call came in about shots being fired. They located the male victim outside the mall in the 10200 block of Santa Monica Boulevard suffering from multiple gunshot wounds. The unidentified victim was taken by paramedics to a hospital, where he was pronounced dead.

The fight allegedly initially involved two groups of women, and the situation escalated when they left the restaurant. The men who were with the women became involved in an argument with each other, said Det. Herman Frettlohr, with the LAPD’s West Bureau Homicide Unit.

The two groups separated and came together again near a valet parking station outside the mall on Santa Monica Boulevard. One of the men pulled out a gun and the victim ran away, Frettlohr said.

The suspect allegedly chased the victim and shot him multiple times. The suspect fled on foot on Santa Monica Boulevard and was not apprehended. Police are investigating the shooting as a possibly gang-related homicide.

Detectives from the LAPD’s West Bureau Homicide Unit were assigned the case and searched for evidence outside the mall throughout the night and early morning. The other people involved in the altercation were questioned and the investigation is ongoing. Santa Monica Boulevard remain closed until the following morning.

The suspect was described as black, 5 feet 7 inches tall and 160 pounds. He was wearing a black hooded sweatshirt and blue jeans.

Anyone with information is urged to call investigators with the West Bureau Homicide Unit at (213)382-9470. During weekends and off-hours, call the LAPD’s hotline at (877)LAPD247.