Suspect charged for robbery, firing a gun in Beverly Hills 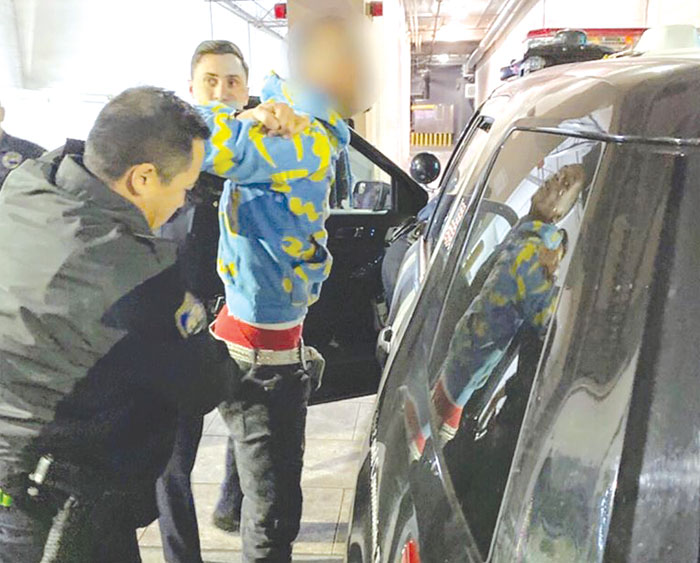 The BHPD posted a photo of the suspect arrested for the robbery on Jan. 11. His face was obscured in the photograph. (photo courtesy of BHPD)

A 23-year-old man was arrested in Beverly Hills on Jan. 11 after allegedly robbing a victim in the 300 block of Canon Drive and firing a shot while attempting to escape.

The robbery occurred at approximately 5:35 p.m. when the suspect allegedly approached a victim on foot, displayed a firearm and demanded property, according to police. The victim handed over jewelry, and the suspect ran away. As the victim fled, he allegedly fired a single shot. Nobody was struck by the gunfire and no injuries were reported, police said.

Officers arrived and located the suspect inside a store near the location where the robbery occurred. The man fled through the rear of the store and police were unable to immediately locate him. A perimeter was established and police conducted an extensive search. Officers found the suspect at approximately 8:30 p.m. in an alley that runs behind businesses in the 200 block of Canon and Beverly drives.

The Beverly Hills Police Department identified the suspect as Aaron Christopher Newsom, a resident of Los Angeles. Lt. Elisabeth Albanese said police recovered two guns, one at the scene of the robbery and another with the suspect when he was taken into custody.

Newsom is facing charges of assault with a firearm, second-degree robbery and possession of a firearm by an ex-felon. He also had a no-bail warrant from the Los Angeles Police Department for a previous arrest for carrying a loaded firearm. Anyone with information is asked to call the Beverly Hills Police Department at (310)550-4951.