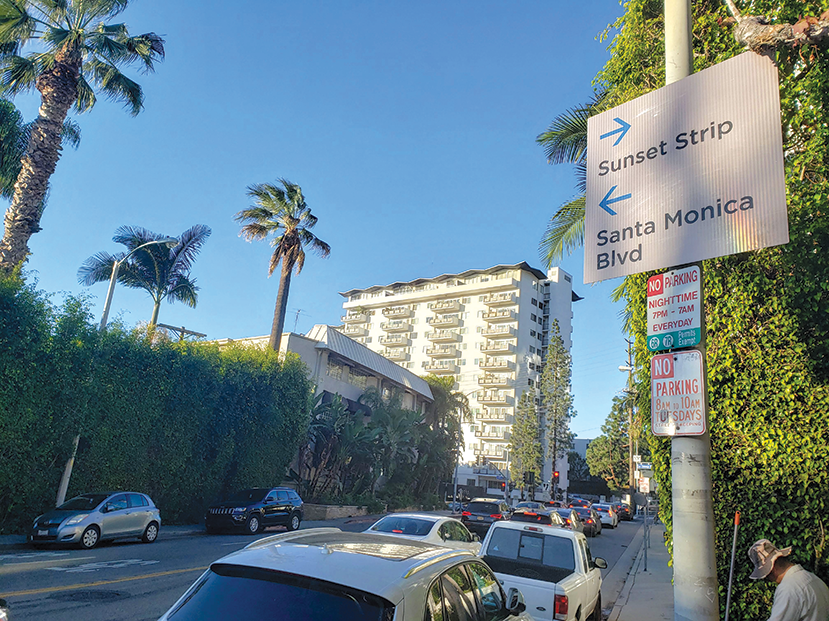 On Jan. 21, the West Hollywood City Council approved a pilot program for wayfinding signs for bicyclists and pedestrians.

The signs are expected to show which direction walkers, bicyclists, wheelchair users and others should travel to reach popular sites, such as the Sunset Strip, as well as how far away they are and the time it would take to get there.

The pilot program was approved by a 4-1 vote, with Councilman John Duran voting against the signs.

Duran added that the signs are unnecessary, as the information they would contain is already readily available on smartphones.

“I think there are better ways to deal with our carbon footprint and reduce driving,” Duran said.

Councilwoman Lindsey Horvath said bicyclists need more infrastructure to “make biking a realistic option for folks.” She added that smartphone dependency comes with issues of its own.

Four members of the public were unanimously in support of the signs, including Michael Schneider, chair of Mid City West Community Council’s Transportation Committee and founder of the transportation-focused nonprofit Streets for All, and West Hollywood resident Kevin Burton, who spoke on behalf of the Bicycle Coalition of West Hollywood.

“If walking and biking are shown to be quicker than driving, including looking for parking, then more people will do it,” Schneider said.

Schneider also pushed for a quick city-wide implementation of the signs, potentially as soon as the coming months, but the council decided the city’s pilot program will be included in the Willoughby and Vista/ Gardner Greenway project, which was first approved by the City Council in 2018 and aims to improve portions of the streets and make them easier for bicyclists and pedestrians to use. It’s possible some signs will be available for people to see at the city’s public outreach event for the project on April 25, said Bryan Eck, the city’s acting long-range planning manager, in an email.

At the urging of Councilman John Heilman, Councilwoman Lauren Meister and Mayor John D’Amico, the wayfinding signs will be visually consistent with West Hollywood’s other signage. First, however, their effectiveness will be tested, and only if the signs prove to be successful will they be placed citywide.

“I agree with staff’s assessment that we should try signage on a very limited basis in the upcoming project, evaluate how that signage works – if at all – and then go through another process to go through a citywide sign program, if we feel that’s appropriate,” Heilman said.

“If we do find it is effective, it needs to go out to bid. It needs to be consistent with the other signage we have in our city so that we don’t just have a hodgepodge of different designs going on,” Meister added.

D’Amico, who initially agreed with Duran and called the signs “a bit of a Luddite idea” before agreeing to support the pilot program, added that the signs should be representative and inclusive of people with disabilities, such as people in wheelchairs.

“I think if we’re going to do this, we need to do it in the West Hollywood way, which is to make sure that everyone is included and that we’re dealing with what goes on in our city, and we’re not asking people to go to other cities, and that we’re paying attention to our own identity, our own brand,” D’Amico said.