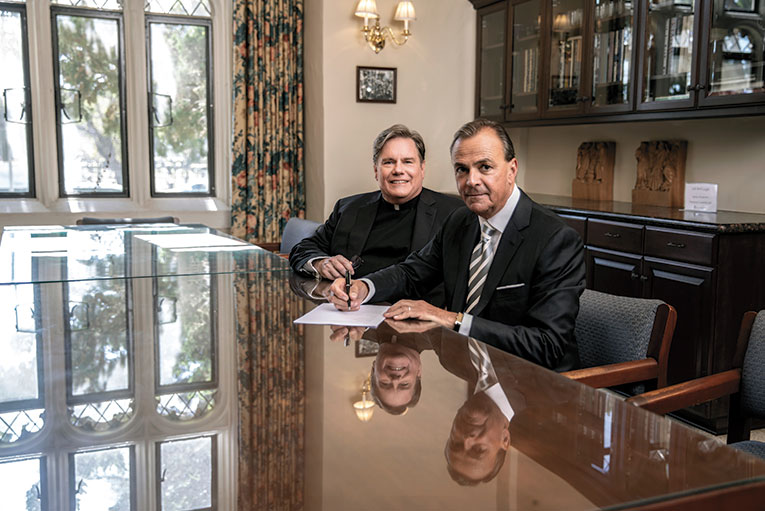 Loyola High School of Los Angeles, the oldest continually operated educational institution in Southern California, has announced that Loyola Board chair, business innovator, civic leader and philanthropist Rick J. Caruso and his wife Tina are donating $5 million to the Jesuit preparatory school, earmarking $4.5 million for the 1901 Venice Boulevard Project and $500,000 for the Caruso Scholar endowment.

The gift is the largest single donation that Loyola has received to date for the 1901 Venice Boulevard Project, ushering in a new era with its construction. The gift will fully endow a four-year scholarship for a high-performing, low-income student from an underserved Los Angeles neighborhood.

“Tina and Rick’s gift is a historic investment in our school, in our students and in our endowment. Their generosity to Loyola will affect generations of Cubs to come,” said Fr. Gregory M. Goethals, president of Loyola High School. “To inspire our students to become future leaders, we must be able to provide them with state-of-the-art facilities that contribute to a thriving educational and spiritual community. Once completed, the 1901 Venice Boulevard Project will transform our campus.”

The 1901 Venice Boulevard Project includes the rebuilding of Caruso Hall, formerly known as Xavier Center, from the ground up. The 26,188-square-foot Caruso Hall will be used for more than 200 events a year. It will include a dedicated sacristy to service liturgies; operable walls that transform the Grand Hall into three separate rooms with multi-area capacity for AP testing events; state-of-the art integrated communications and audio-visual equipment; a full-service banquet kitchen capable of serving 800 guests; a multi-purpose student kitchen and ADA-compliant restrooms.

The 1901 Venice Boulevard Project will also enhance Hayden Circle with a new front entrance gate and eco-friendly landscaping as well as a Graduate-at-Graduation Walkway. A Veterans’ Memorial will be also be erected in tribute to Loyola students who have served or are serving the country.

“Through my work on Loyola’s board and as the parent of a cub graduate, not only have I witnessed firsthand the academic excellence this institution instills in all its students, but equally as important, the spiritual growth that is integral to turning young men into positive contributors to society,” Caruso said, who is also developer of The Grove. “Tina and I are proud to be part of the reimagining of the southwestern part of Loyola’s 21-acre campus as well as supporting promising students from low-income neighborhoods in their pursuit of a quality high school education.”

Beginning in the 2020-21 academic year, Loyola will have its first Caruso Scholar, who will receive a four-year scholarship, fully endowed by the Caruso Family Foundation.