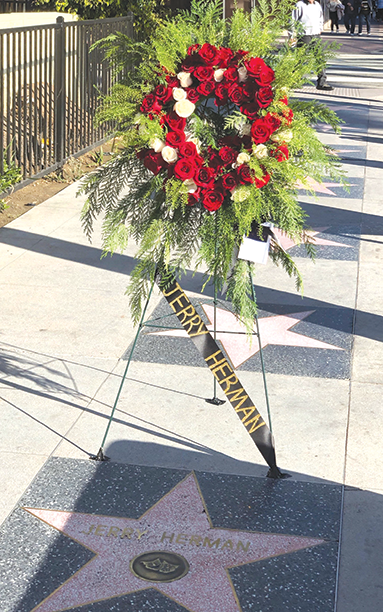 Flowers were placed on Dec. 27 at the Hollywood Walk of Fame star of Jerry Herman, who died on Dec. 26 at the age of 88. Herman was a composer and lyricist known for Broadway hits including “Hello, Dolly!,” “Mame” and “La Cage aux Folles.” He was a five-time Tony Award-nominee and won twice for “Hello, Dolly!” and “La Cage aux Folles.” The composer received a Tony Award for Lifetime Achievement in 2009.

Herman, who grew up in New Jersey, learned to play piano when he was a child and frequently attended Broadway shows as a youth. While playing in a jazz club in New York City in 1957, Herman was asked to write music for a show to serve as a replacement for a different musical. He created “Nightcap,” which opened the following year and ran for two years. He later wrote scores for numerous musicals, films and television shows and continued working into his 80s. He recently wrote an episode for the “The Marvelous Mrs. Maisel” in 2018. Herman received a Walk of Fame star in 1994 in the Live Performance category at 7095 Hollywood Blvd.