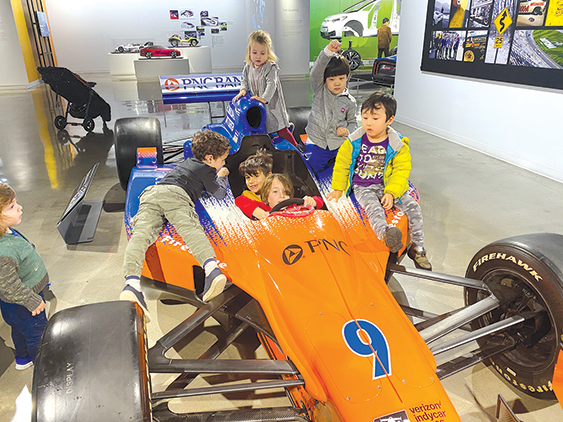 The Petersen Automotive Museum has announced extended hours, new exhibits and educational programming that will be open during the winter break from school through Jan. 12.

“Although kids will be on break from school, the Petersen Automotive Museum offers students an opportunity to gain an education in other areas,” Executive Director Terry L. Karges said. “Our new exhibits and special programming in the Discovery Center give kids an invaluable glimpse into the history and future of transportation. It’s an easy and compelling way to broaden kids’ knowledge about something as common as the automobile.”

New exhibits include three displays that showcase the history and development of electric vehicles. “Building an Electric Future” and “Shifting Paradigms” in the Production and Chuck Wegner Family galleries focus on the global success and future of automobile manufacturer Volkswagen as it converts its vehicles to electrical power. Vehicles on display include the ID.3 compact car, ID. Vizzion autonomous car and ID. R race car.

Located in the Mullin Family Grand Salon, “Hollywood Dream Machines” is the world’s largest Hollywood and sci-fi vehicle exhibition. It features more than 40 vehicles, costumes, props, art and artifacts from sci-fi and fantasy films, TV shows and video games including “Star Wars,” “Back to the Future,” “TRON,” “Iron Man,” “Blade Runner,” “Batman” and “Halo.” In addition to the vehicles, the space also includes a Microsoft Hololens Augmented Reality experience called “Worlds Reimagined” that tells the stories of the “Back to the Future” Delorean and “Halo” Warthog.

Numerous children’s activities and photo opportunities are also available. Visitors can pose in a Honda raced by Scott Dixon and participate in the Forza Motorsport Racing Experience in the Bobby Rahal Family Gallery.

The Petersen Automotive Museum is located at 6060 Wilshire Blvd. For information, visit petersen.org.