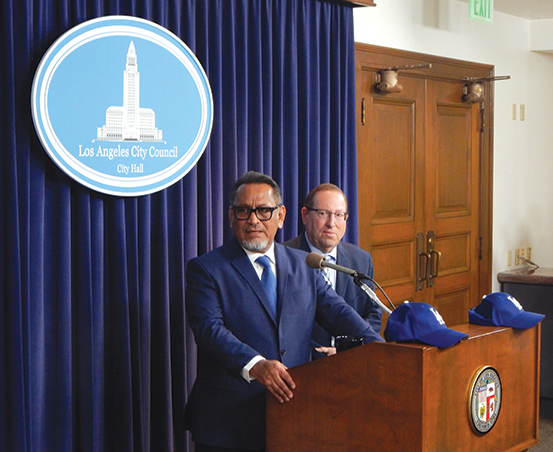 Los Angeles City Councilmen Gilbert Cedillo and Paul Koretz held a press conference in support of their resolution before the full council vote on Jan. 21. (photo by Cameron Kiszla)

Earlier this month, Major League Baseball Commissioner Rob Manfred released the results of an investigation that confirmed reports that the Houston Astros cheated during their 2017 World Series-winning season. Manfred found the Astros used electronic equipment to steal opponents’ signs and tipped off their teammates as to what the pitcher planned to throw.

Manfred fined the Astros organization, took away draft picks and suspended the team’s manager and two executives, and the Boston Red Sox and New York Mets have parted ways with their managers, who were identified as participants in the alleged scheme.

On Jan. 22, Manfred said in a Fox Business interview that the investigation of the Red Sox is ongoing, though he pointed out there is a “long tradition in baseball of not trying to change what happened” and “it’s absolutely unclear if the Dodgers would’ve been the World Series champions,” whether or not signs were stolen.

However, some Dodger fans want more done, and elected officials in Los Angeles and Beverly Hills are working to make it happen.

In a 10-0 vote on Jan. 21, the Los Angeles City Council approved a resolution calling for the 2017 and 2018 World Series titles to be retroactively awarded to the Los Angeles Dodgers, who lost to the Astros and Red Sox, respectively. Council members Mike Bonin, Joe Buscaino, Jose Huizar, Monica Rodriguez and Herb Wesson were absent.

The city’s resolution was jointly proposed by City Councilmen Gilbert Cedillo, 1st District, and Paul Koretz, 5th District, who described themselves as two of the biggest Dodger fans on the council.

“This country needs to receive a message,” Koretz said at a press conference before the Jan. 21 council meeting. “Cheating is not OK. We need that message now more than ever. If we don’t stand up for the ethics of baseball, then indeed the entire system of the American pastime is flawed.”

Cedillo, whose district includes Dodger Stadium, added that the World Series losses had an adverse impact on much of the city, from Angelenos who work in the service industry to fans who thought their team was competing in a fair competition.

“People were robbed, and we want it to be clear that this city spoke up for its team,” Cedillo said. 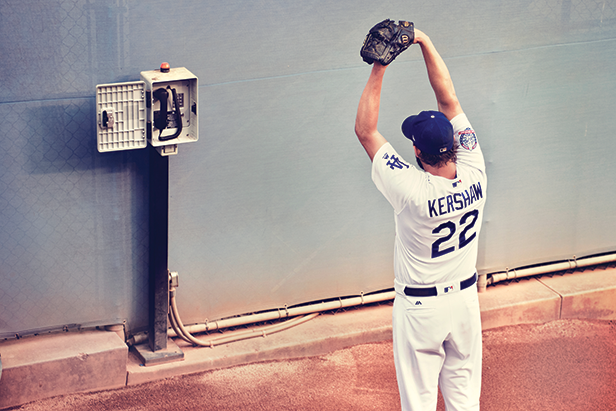 Elected officials in Los Angeles and Beverly Hills think pitcher Clayton Kershaw and the other Dodgers players were cheated out of a World Series title by the Houston Astros. (photo by Tim Mossholder/courtesy of Unsplash)

Another Dodgers-related motion will likely be voted on by the Beverly Hills City Council on Jan. 28, Mayor John Mirisch said in an op-ed published on the Sports Column website, though his request is more limited in scope than the Los Angeles resolution.

Mirisch wants only the Astros’ title vacated, as Manfred has not yet released a report that confirms the Red Sox cheated on their way to the 2018 championship, and the players involved suspended. Mirisch is also not looking for a title to be retroactively awarded to the Dodgers.

“That would be extremely self-serving … Having the World Series title for that year or those years be vacant serves as a reminder on the importance of fair play and what happens when we fail to respect the game,” Mirisch said.

Koretz said Los Angeles included the Red Sox because it “seems pretty clearly and highly likely” that the Red Sox also stole signs, as their manager in 2018, Alex Cora, was heavily implicated in the MLB report.

“I don’t have much doubt [that the Red Sox also cheated],” Koretz said.

In a statement, the Dodgers said all MLB teams have been asked not to comment on the scandal and had no further comment, though players – on the Dodgers and across the league – have been making their displeasure known on social media.

Koretz said he was aware the players were “wounded” by the scandal, and added that he too was shocked by the “high-tech precision” of the alleged cheating.

“Knowing what pitches a pitcher will throw all but guarantees a victory,” Koretz said. “As a Dodger fan since age 3, I am outraged. As a lifelong baseball fan, I feel the national pastime itself is mortally wounded.”

“This is a crisis that goes beyond the mere sport of the game. It goes to the very core of what it is to be an American,” Cedillo added.

Mirisch said further disciplinary action by the MLB would set a positive example for Little League participants in Beverly Hills and beyond. The city participates in the Play Ball initiative, which is cosponsored by the MLB and the United States Conference of Mayors.

Baseball fans around the world continue to debate whether the proposals by Mirisch or Koretz and Cedillo are the best way forward, or if Manfred should decline to further punish those involved. A survey of more than 1,000 MLB fans conducted on behalf of ESPN found that 58% of respondents thought the Astros players involved should have been punished. Additionally, 56% of respondents said the Astros should give up their championship, and 53% believe the Red Sox should surrender their trophy.

Pitcher Yu Darvish, who played on the 2017 Dodgers team, joked on Twitter that “If the Dodgers are planning a 2017 World Series parade, I would love to join! So if that is in the works, can someone make a Yu Garbage Jersey for me?”

Infielder David Freese, who was a member of the 2018 Dodgers team, seemed less interested.

“Take the ring away? Maybe that’s the right thing to do. Maybe not. Who knows,” Freese tweeted. “Giving the title to the runner-up [though] … that definitely ain’t it. Who would want it that way anyways.”