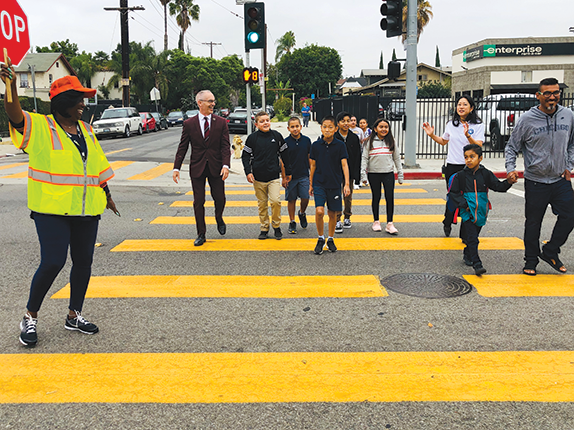 “As we welcome a new decade, I want to share with you a snapshot of some community projects we’ve worked on together along with citywide legislative action my office took this past year to improve the quality of life in our neighborhoods,” O’Farrell said.

“Being your representative on the Los Angeles City Council is an amazing privilege. And my team is as focused as ever on our commitment to offer exceptional constituent services, create more affordable housing, address homelessness, enhance pedestrian safety and beautify our public spaces,” O’Farrell added.

In Hollywood, highlights include the opening of the city’s second A Bridge Home site in a city-owned parking lot on Schrader Boulevard, where 72 beds serve people experiencing homelessness. In addition, the Young Women’s Christian Association shelter began the process of doubling its capacity to 120 beds, and a winter shelter with 30 beds for transitional age youth opened at the Salvation Army.

O’Farrell also celebrated street and sidewalk improvements, including the installation of more than 80 wayfinding signs in the Hollywood Entertainment District, and the historic-cultural monument designation for the AGFA Ansco Building at 6424 Sunset Blvd., the 20th landmark designation in the 13th District since O’Farrell assumed office in 2013.

In East Hollywood, Wilshire Center and Koreatown, O’Farrell praised the groundbreaking of the Little Armenia Gateway Project, the UNESCO World Heritage designation of the Frank Lloyd Wright-designed Hollyhock House and the expansions and improvements of pedestrian safety measures.

“As we head into 2020, I will continue to lead the way to make our neighborhoods cleaner, healthier and safer. I look forward to continuing to work with you in the new year and beyond,” O’Farrell said.