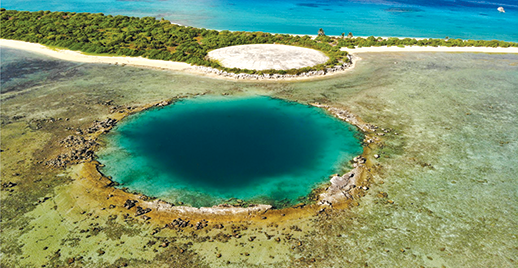 The U.S. Department of Energy has disclosed high levels of radiation in giant clams in a lagoon near the Runit Dome, where the U.S. entombed radioactive waste from U.S. nuclear testing in the Marshall Islands almost four decades ago. (photo by Carolyn Cole)

Attendees will also be able to view “Godzilla: A Living Atomic Bomb,” an exhibition case that focuses on the real-life nuclear tests carried out on Bikini Atoll that inspired the monster, which is on display on the second floor of NHM through April 19, as well as special collections from the museum’s anthropology department.

The United States detonated 67 nuclear bombs in the Marshall Islands between 1946 and 1958, resulting in the exile of entire communities from their homelands, radioactive contamination,  sickened people and the beginnings of a shared history of mistrust and betrayal.

The National History Museum is located at 900 Exhibition Blvd. For information, nhm.org/latalks.