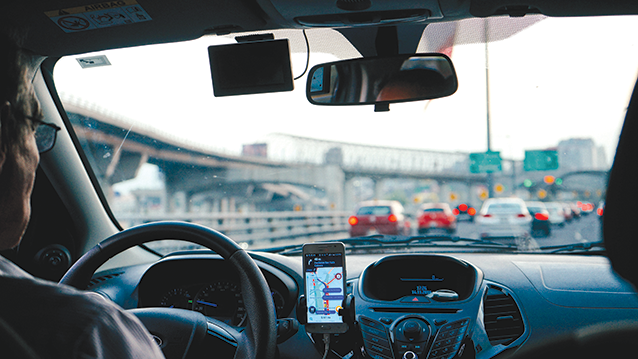 Drivers for ride-hailing companies like Uber and Lyft will be affected by California’s Assembly Bill 5. (photo by Dan Gold/courtesy of Unsplash)

The California State Legislature passed legislation throughout 2019 addressing an array of issues. From protecting vulnerable populations, like the elderly, to safeguarding voter data, the following bills went into effect on Jan. 1.

Assembly Bill 5 was authored by Assemblywoman Lorena Gonzalez (D-San Diego) to limit employers from classifying workers as independent contractors rather than employees.

The bill is designed to regulate companies that hire contract workers in large numbers, such as ride-hailing companies like Uber and Lyft. Some exceptions were made for certain professions, including doctors, dentists and lawyers.

Gov. Gavin Newsom signed the bill in September. Since November, separate lawsuits have been filed by Uber and Postmates, truck drivers and journalists against the legislation. Gonzalez has said she is open to make changes to the bill in the new year but does not want it repealed.

In March, Newsom signed Senate Bill 126, which requires all schools that receive taxpayer funding, including charter schools and charter management organizations, to adhere to the same public records and open meeting laws that apply to school districts.

The bill requires charter schools and their management to hold meetings in specified locations and prohibits the discussion of any items regarding an activity of the school’s governing body that are unrelated to the operation of the school. These requirements are already in place for public schools.

Another bill, signed by Newsom in October, seeks to protect California’s elderly. Sponsored by state Sen. Hannah-Beth Jackson (D-Santa Barbara), the legislation adds to an executive order made by Newsom in June to create a master plan for aging to prepare the state for upcoming demographic changes.

The bill instructs the director of the California Department of Aging and the secretary of the California Health and Human Services Agency to coordinate on the development and implementation of the master plan and submit annual updates.

“By 2030, our older population will nearly double in California, bringing an increase of 4 million people over the age of 65,” Jackson said. “We owe it to them and all Californians to ensure that our state has thoughtfully prepared for this demographic shift.”

Other legislation passed in November aimed to make the pretrial justice system more fair for the accused between the time they are charged with a crime and when they are brought to trial.

Senate Bill 36 will establish guidelines regarding the use of risk assessment tools used to examine the likelihood that a defendant will fail to appear for a scheduled court date or commit further criminal violations if released.

“When it comes to the way we handle the accused before trial, California is simply failing. We can do better, and we must do better,” said Senate Majority Leader Bob Hertzberg (D-Van Nuys), who co-authored the bill.

Prior to the bill’s passage, there were no minimum standards governing the effective use of risk assessment tools and no safeguards in place to ensure that they are being used in a way that accurately estimates risk while minimizing bias.

Safeguards were also prioritized during the 2019 legislative year in election cybersecurity. Assembly Bills 1043 and 1044, authored by Assemblywoman Jacqui Irwin (D-Thousand Oaks) and sponsored by California Secretary of State Alex Padilla, were signed by Newsom in July.

AB 1043 permits political campaigns expenditures of cybersecurity technology and services, and AB 1044 requires entities applying for voter registration data to demonstrate that they have completed a specified course on data security.

“As political campaigns and organizations are increasingly targets of cyber threats, they too have a role and responsibility in defending our democracy,” Padilla said.

Prior to AB 1043’s passage, applicants for voter data only had to provide documentation of their organizational affiliation, description of their plans for using the data and a plan to securely store it.

Although it will not go into effect until Jan. 1, 2023, Newsom signed another education-related bill in October allowing all student-athletes enrolled in public and private four-year colleges and universities in California to earn money from their name, image or likeness.

The Fair Pay to Play Act, sponsored by state Sens. Nancy Skinner (D-Berkeley) and Steven Bradford (D-Gardena), became the first of its kind in the nation.

The bill will distribute financial power to student-athletes, who are currently barred by the National Collegiate Athletic Association from earning compensation from their association with college sports. Nationwide, colleges and universities make $14 billion each year from student athletics, and the NCAA takes in $1 billion annually, according to Newsom.

The California State Assembly will reconvene on Jan. 6 to begin the 2020 legislative year.