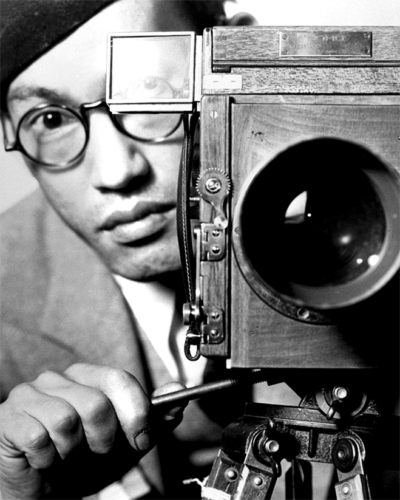 A self-portrait of photographer Toyo Miyatake is included in the new exhibit at the Japanese American National Museum. (photo courtesy of JANM)

On the 78th anniversary of President Franklin Roosevelt’s executive order that authorized Japanese American internment camps, JANM and Terasaki have partnered to transform the museum into a multisensory experience that brings together historic photography, mist projection, immersive installation, lenticular imagery, contemporary portraiture and videography to honor the known and unsung “heroes at borders.” Terasaki’s parents and grandparents were incarcerated in an internment camp holding Japanese Americans during World War II.

“These are the heroes that advocate and fight for those who face discrimination, prejudice and inequity at the many borders that divide and separate us,” Terasaki said. “These heroes are an inspiration for fellow Americans, something we now need more than ever. By illuminating the stories of these individuals, we hope to educate attendees about the advocacy work they do and inspire a spirit of unity and action in support of democracy and justice for all. These stories will underscore that the forces of intolerance, injustice and human rights indignities, which resulted in the incarceration of Japanese Americans during World War II, are ever-present today.”

In the museum’s main plaza, a shipping container will immerse visitors in the experience of today’s migrants desperate to escape the hardships of their home countries and the inhumane treatment some have endured at the border. Artistic visuals inspired by detention centers and live-feed video projections onto mist will connect visitors to the plight of detained migrants.

A series of lenticular structures will parallel past attacks on democracy with those that currently exist and will explore the various “borders” the exhibit intends to spotlight.

In the museum’s Weingart Gallery, visitors can view a short film projected on mist about Satsuki Ina, a Japanese American woman born in the Tule Lake Segregation Center, who has dedicated her life to the study of community trauma and has become an advocate and counselor for children currently enduring family separation and detention at the border.

In another section of the exhibit, floor-to-ceiling images will focus on current events and threats to democracy, bringing awareness to issues and highlighting threats that also exist outside the United States.

The final section is a ceremonial offering at a memorial wall, where tributes to passed loved ones and activists who have fought for justice in their communities can be seen.

“I, as well as all of us, have a responsibility to remember and analyze what happened then, to not look away and to not lie to ourselves, so we can make sure this never happens again,” Terasaki said.