Mural to be unveiled at Purple Line Station 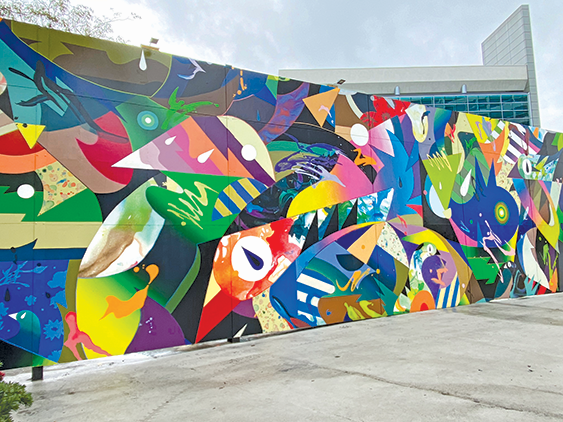 Artist Tomokazu Matsuyama incorporated birds into the mural design, which he said are a symbol of eternity in many cultures and a metaphor for happiness. (photo courtesy of Derrick Ontiveros)

The city of Beverly Hills is holding a ribbon-cutting ceremony at 1 p.m. on Jan. 12 to celebrate the unveiling of a new mural in the 100 block of North Canon Drive.

Installed in November, the 80-foot-long, 20-foot-high mural was designed by Brooklyn-based artist Tomokazu Matsuyama, who will attend the ceremony. The mural, commissioned by the city for $125,000, was painted on the north side of a temporary sound wall installed by Metro as part of construction for the Purple Line Extension’s Wilshire/Rodeo Subway Station.

Members of Next Beverly Hills, a committee whose goal is to make the city more attractive to people between the ages of 25 and 45, approached the Beverly Hills City Council with the idea. One of the committee’s focuses for 2019 was “next-gen arts.”

“We want diverse forms of art in the city and we can do it on a really grand scale,” said Derrick Ontiveros, vice chair of the committee.

“Next-gen art” creates a space for people to congregate and functions as a conversation piece, according to Ontiveros.

In a joint effort with the City Council and the Arts and Culture Commission, Next Beverly Hills reached out to stakeholders along North Canon Drive to collaborate on selecting an artist and finalizing the mural’s design. Businesses nearby include Spago, Mastro’s, Douglas Emmett, Montage, AKA and Coldwell Banker.

The council selected the colorful, abstract design “Thousand Regards/Shape of Color” from two options presented at its Sept. 10 study session.

During public comment, Kathy Davoudi-Gohari, the former president of the Rodeo Drive Committee, thought the alternative concept could not be captured in full unless viewers moved further away and that the selected work would be better for close-up photos and would not impede traffic.

“If I’ve learned anything in the last three years, people want to take pictures,” Davoudi-Gohari said. “People, when they see color, when they see an interesting piece of art, they want a moment of it.”

The sound wall will remain for a minimum of two years, according to the article of memorandum approved by the City Council for the construction of the Wilshire/Rodeo Station.

Maintenance cost is estimated at $1,000 per year.