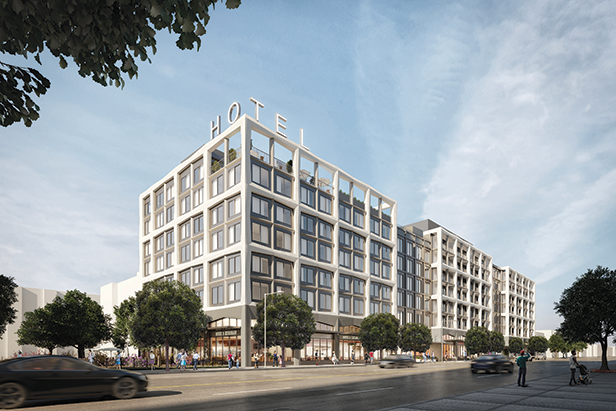 A proposed mixed-use project would build hotel, residential and commercial space near the corner of Wilshire and La Brea. (rendering courtesy of CGI Strategies)

A proposed project with a hotel, residential units and commercial space adjacent to the site of the future Metro Purple Line subway station at Wilshire Boulevard and La Brea Avenue will be heard by the Los Angeles City Council’s Planning and Land Use Management Committee next month.

The project, located at 623-671 S. La Brea Ave., was scheduled to go before the committee on Jan. 28, but the item was continued until Feb. 11. The item was previously continued from the Jan. 14 meeting. A request for information from the City Planning Department was not returned before press time.

If approved, the project from CGI Strategies will create 121 condominiums, 125 hotel rooms and 13,037 square feet of commercial space. The eight-story, 87-foot-tall structure will also include 177 parking spaces on two underground levels. Representatives from CGI Strategies did not return requests for comment before press time, but according to the company’s website, the site was acquired in 2016.

“Located at a pivotal intersection of multiple thoroughfares as well as a future Metro station, the completed project will feature a compelling hybrid of residential and commercial space that will complement the creative and professional culture of the area,” according to the project description on the CGI Strategies website.

In September, the Mid City West Community Council Board of Directors approved the project by a vote of 28-1, with one abstention. Mehmet Berker, chair of the Mid City West Community Council Planning and Land Use Committee, said while there are hotels nearby, it will be nice to have one in the immediate area. Berker added that this project creates housing without displacing any existing tenants, and the applicant has agreed to several conditions of approval from the council, including an additional moderate-income unit, a promise that the sidewalk will remain open during construction and spaces for car-sharing services to use in the parking garage.

“We have a goal of supporting more housing,” Berker said. “If a project does that and is not a factor in displacing people in an illegal or untrustworthy way – especially a project like this where it’s commercial or a vacant parcel – what we want to do is come in and say ‘That meets our goal of adding residents. Is there a way to make this project even better?’”

Berker added that CGI Strategies will also give new residents Metro TAP Cards, which may help encourage people to use public transit instead of driving.

“Research has shown that people are more likely to change their transportation behavior during a big life event, like a move or a new job. We think it’s a good time to give them a transit pass to get them started if they haven’t already,” Berker said.

Gallen said in an email that the project misuses the Transit Oriented Communities Incentive Program, which is intended to build affordable housing near bus and train stations, to create a luxury hotel and residential complex with only 14 affordable units. In addition, she said the project’s environmental impact has not been properly studied, parking is likely to be an issue and the developers’ plan to use the alley behind the commercial businesses on La Brea Avenue as the complex’s entrance and exit point is a mistake.

Gallen said many of her constituents and nearby businesses already rely on access to the alley because Detroit Street is one-way in that area.

“Residents will be blocked throughout the day and night without warning by trucks queueing, arriving and leaving,” she said. “Residents will also compete with a high volume of passenger cars entering and exiting the garage through the alley.”

Jim O’Sullivan, president of the Miracle Mile Residential Association, said the MMRA is opposed to the project, citing many of the same concerns as Gallen. O’Sullivan added that as the Purple Line Extension project nears completion, developers are looking to make the Miracle Mile even denser than it already is.

“All of the buildings north and south of Wilshire on La Brea, they’re going to start building on them. But you look at La Brea and how jammed it is, and you start wondering how big can they grow? How tall can these buildings get? They’re trying to cram a lot into an area,” O’Sullivan said.

Mark Pampanin, spokesman for City Councilman David Ryu, 4th District, said in an email the councilman is “following this planning case closely and believes the project should contain more affordable housing.” Pampanin also echoed some of the concerns about the environmental impact and the Transit Oriented Communities incentive.

Street closures in Hollywood for 2020 Oscars