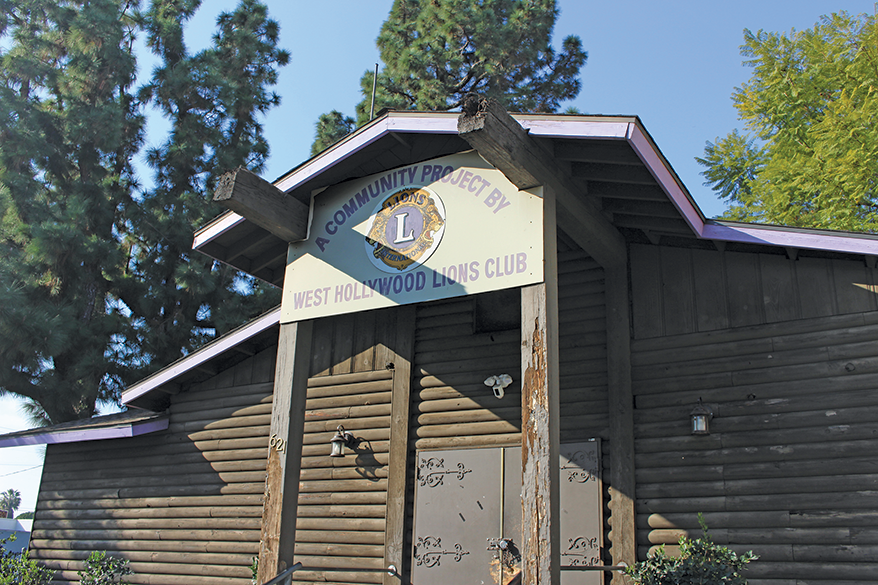 Located at 621 N. Robertson Blvd., the Log Cabin serves as a hub for alcohol and drug recovery meetings. (photo by Morgan Keith)

Home to some of the area’s earliest Alcoholics Anonymous meetings, the future of the nearly century-old Log Cabin, located in West Hollywood but owned by the city of Beverly Hills, is up in the air.

After a notice was posted by the city of Beverly Hills to vacate the premises for demolition or relocation, discussions began with the city of West Hollywood to determine a shared approach to the current uses of the Log Cabin located at 621 N. Robertson Blvd.

According to West Hollywood City Councilman John Duran, the Lions Club has operated the Log Cabin since the 1940s. A Jan. 10 letter from the city Beverly Hills to the Lions Club said that the club’s lease had expired in 1977 and that it must remove all buildings, improvements and landscaping by March 31 and leave the premises “free of all foundations and debris.”

In response, Lions Club President Gyula Kangiszer sent a response letter on Jan. 14 asking the city of Beverly Hills to rescind the notice. Kangiszer previously attempted to get the Log Cabin designated as a historic-cultural monument, but only the landowner, not the building owner, can apply.

“People, when they have addiction, they have concerns about where they can go. This is a safe space for them,” Kangiszer said.

Duran, who has attended Sunday morning meetings at the cabin for over 20 years, is one of thousands of people who rely on the space for recovery meetings.

“We have this social safety net that exists around the sober community in West Hollywood, and it’s crucial it stays there,” Duran said.

The city of Beverly Hills recently completed an audit of its property inventory in 2018 and a contractor who surveyed the Log Cabin found that portions of the building were in poor condition and that no lease had been in place since the ‘70s. The cabin is nearly 100 years old and while some improvements have been made, Kangiszer said building updates were halted during inquiries into the ownership of the land.

“Both cities recognize the important work that has occurred at the site and the countless lives that have been changed for the better,” said George Chavez, city manager of Beverly Hills. “Our concern is the safety of those within the building.”

Discussions have been ongoing between the cities since Beverly Hills’ 2018 audit found discrepancies with the lease, although an agreement was not reached with West Hollywood prior to the notice to vacate being sent out, Beverly Hills spokesman Keith Sterling said.

West Hollywood will conduct its own audit of the building’s conditions in the coming days, according to a joint press release from the cities. In the meantime, Beverly Hills will provide alternative meeting locations for organizations that use the facility. The cities will provide updates as discussions progress.

“Tens of thousands of people have been helped by the 12-step meetings at the Log Cabin on North Robertson over the past four decades; these meetings are a vital resource for the West Hollywood and greater Los Angeles sober community,” West Hollywood Mayor John D’Amico said.

“We are committed to continued availability of services. This space serves a significant and valuable role for the recovery community, and we will examine all potential options,” said West Hollywood City Manager Paul Arevalo.

City Councils from West Hollywood and Beverly Hills will have to determine what will be done with the Log Cabin and will likely begin discussions in the following weeks, Sterling said.

This article was updated at 4:22 p.m. on Jan. 16 to reflect that the Log Cabin could be relocated.