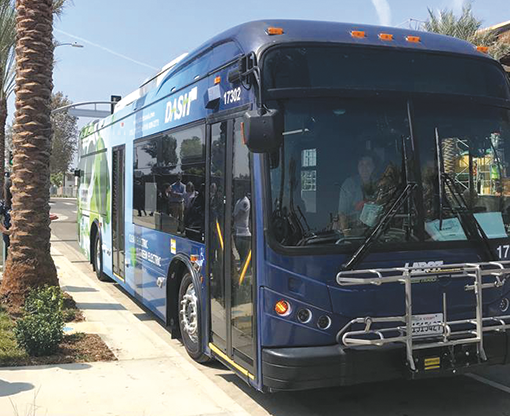 LADOT expanded DASH bus services in 2019, including a new line to the Griffith Observatory. (photo courtesy of LADOT)

The Los Angeles Department of Transportation has announced that more sustainable options were unveiled last year to help residents get around the city, and new infrastructure was created to better support services, while the department continued to field tens of thousands of service requests from residents.

LADOT opened its new bus operations and maintenance facility in downtown. In addition to achieving LEED Platinum Certification, the transit facility is equipped with solar panels that produce 600,000 kilowatts of energy per year and includes 26 electric charging stations. It will facilitate LADOT’s goal of achieving an all zero emission bus fleet by 2030.

The LADOT Transit team also launched LAnow, an on-demand, micro-transit service in which users can request a ride by using an app, going online or making a phone call. The pilot service cuts carbon emissions by grouping people headed in the same direction.

Additionally, LADOT activated the largest scooter program in the country. With 36,000 scooters permitted to operate, preliminary data shows that people in Los Angeles are averaging 1 million scooter trips in the city each month. The expectation is that the scooter trips will translate into 1 million trips avoided in single occupancy vehicles which add to congestion and pollution.