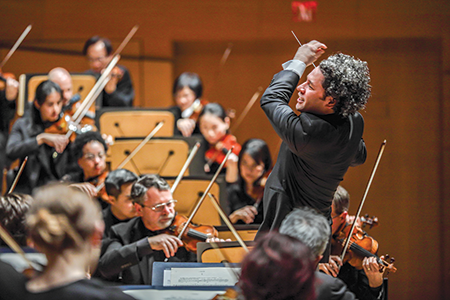 Music and artistic director Gustavo Dudamel and the Los Angeles Philharmonic’s recording of the world premiere of Andrew Norman’s “Sustain” won the Grammy Award for Best Orchestral Performance at the 62nd annual Grammy Awards on Jan. 26.

“Sustain” was commissioned by the LA Phil and recorded in partnership with Deutsche Grammophon to help celebrate the orchestra’s centennial season in October 2018 at Walt Disney Concert Hall.

“Andrew Norman is an extraordinary talent and vital member of our LA Phil family,” Dudamel said. “We are all so proud to have been able to commission, premiere and record this magnificent work of his.”

Norman is a faculty member of the USC Thornton School of Music and director of the LA Phil’s Barry and Nancy Sanders Composer Fellowship Program. The LA Phil first presented his music in 2010 and has since commissioned and given the world premieres of a number of his major works. He was Musical America’s Composer of the Year in 2017 and won the Grawemeyer Award for 2013’s “Play,” another recording which received a Grammy nomination.

“It was an honor and a privilege to collaborate with Gustavo Dudamel and the inspiring musicians of the Los Angeles Philharmonic,” Norman said. “They brought my piece to life in a completely magical way, and I am very grateful for all the work they do to move this art form forward.”

Norman’s “Sustain” marks the second Grammy for the Los Angeles Philharmonic and Dudamel. In 2012, they won Best Orchestral Performance for their recording of Brahms’ Symphony No. 4.