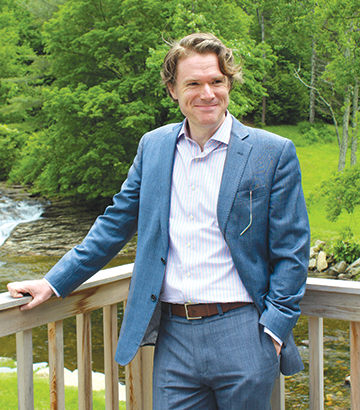 Cadwallader will work closely with Music Director Jaime Martín in support of Martín’s artistic vision and will oversee all aspects of the orchestra’s strategic planning and operations, provide administrative oversight and collaborate with the board of directors to optimize LACO’s fiscal growth.

“Ben, who cares deeply about music and musicians, will serve as a valuable colleague on artistic matters, and I am looking forward to working with him,” Martín said.

An advocate for the vibrant future of live classical music, Cadwallader has served as Vermont Symphony Orchestra’s executive director since 2015. His bicoastal experience also includes leadership positions with the Los Angeles Philharmonic, where he served as education programs manager from 2012 to 2015, the Youth Orchestras of San Antonio and the East Coast Chamber Orchestra.

“I have long admired LACO’s steadfast commitment to musical excellence and new music as well as its ability to experiment and adapt within a changing media landscape,” Cadwallader said. “Working in partnership with [Martín] and LACO’s stellar artists to bring their vision for the orchestra to life will be a joy personally and professionally. While I’m genuinely saddened to close my chapter in Vermont, the remarkable people affiliated with LACO have welcomed me with open arms, and I’m excited to get to work there.”

At the L.A. Phil, Cadwallader managed the unique Composer Fellowship Program and worked with sought-after, contemporary composers associated with LACO including Andrew Norman, Sarah Gibson and Christopher Rountree. As a mark of his track record for making significant contributions to his orchestra and to the classical music field, he was one of nine arts administrators from across the country selected in 2017 by the League of American Orchestras for its Emerging Leaders Program.