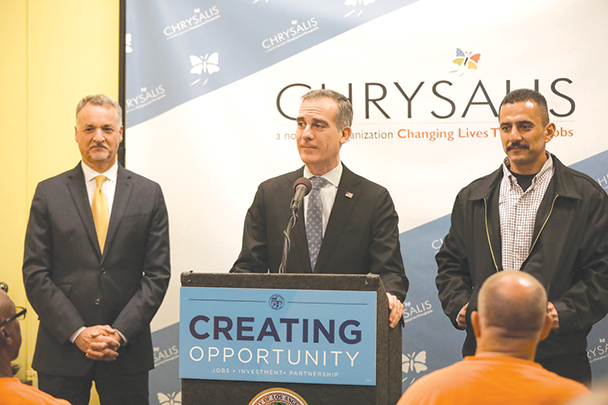 “Los Angeles is a place where everybody belongs, and we’ll keep working to create opportunities for anyone ready to give back to our communities,” Garcetti said. “No one needs a second chance more urgently than our formerly incarcerated sisters and brothers, and New Roads to Second Chances gives people a chance to rebuild their lives through the dignity of work.”

The New Roads program was launched in 2016 with an initial $8.9 million state grant through a partnership between the mayor’s office, Caltrans and Chrysalis. To date, New Roads has served more than 1,200 individuals on probation or parole with job training, workforce development, wraparound services and transitional employment. The goal is to support their reentry into society following incarceration.

Each New Roads participant is eligible for up to 90 paid working days on a Caltrans crew. Since the program’s inception, New Roads teams have collected 606,811 bags of trash from roads and highways in L.A. County.

“We know that African Americans and other people of color are disproportionately represented in our criminal justice system,” said Los Angeles City Councilman Marqueece Harris-Dawson, 8th District. “It’s important that these people have the support services and opportunities to thrive following incarceration. New Roads provides thousands of opportunities to men and women looking to establish themselves in the city and rejoin their communities.”

Beyond joining cleanup crews, participants work with case managers at Chrysalis to help them develop resumes, participate in job-readiness classes, complete practice interviews and access computers, professional attire and scholarship funds. While working for New Roads, participants develop skills that enable them to transition to full-time employment and long-term self-sufficiency.

“For individuals trying to navigate challenges to securing employment, such as experience with the criminal justice system, a transitional job presents the opportunity to get back to work quickly, earn a wage and develop or build on their skills,” said Mark Loranger, president and CEO of Chrysalis. “The job outcomes for this program are impressive. But one of the most amazing things that I’ve seen happen over the first several years of this program is how crew members work and grow together. The experience of working on a team and with supervisors who are invested in their success is clearly a part of why this program has had such great outcomes.”