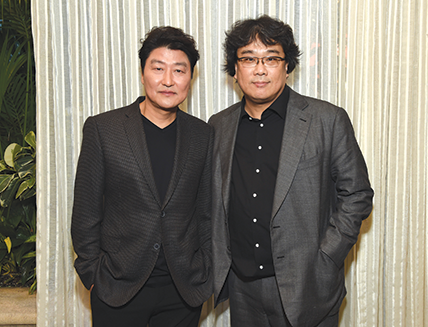 Actor Song Kang Ho, left, and writer and director Bong Joon Ho were honored with an AFI Special Award for their work on “Parasite.” (photo courtesy of AFI)

On Jan. 3, the American Film Institute celebrated the 2019 AFI Awards honorees at a luncheon in Beverly Hills. The awards are a celebration of the film and television arts’ collaborative nature and seeks to honor creative teams as a whole.

During the event, AFI provided the cultural and historic context for inclusion of its 22 honorees of the year’s most outstanding film and television programs. Mel Brooks, the 43rd AFI Life Achievement Award recipient, introduced the awards presentation.

AFI chose to honor “The Farewell” for writer and director Lulu Wang’s ability to find a “rich vein of humor in the dark mines of mortality,” and Awkwafina’s performance as Billi, whose performance “looks to the future as a bond between East and West, comedy and drama, and generations young and old.”

Another 10 AFI Awards were giving to television shows “Chernobyl,” “The Crown,” “Fosse/Verdon,” “Game of Thrones,” “Pose,” “Succession,” “Unbelievable,” “Watchmen” and “When They See Us.”

“Watchmen” was selected by AFI for Damon Lindelof’s richly-layered story tackling white supremacy with heroism that “radically re-imagines right and wrong,” as well as Regina King’s role as Sister Night, “just the hero we’ve prayed for in a world gone mad.”

Closing the event, EGOT winner Rita Moreno delivered the annual benediction in celebration of the honorees’ remarkable achievements in film and television. “I am filled with hope and love and excitement because times are changing, and I applaud it and I applaud you,” Moreno said.

Rebuilding something beautiful in WeHo

Schiff has ‘several concerns’ about potential war with Iran