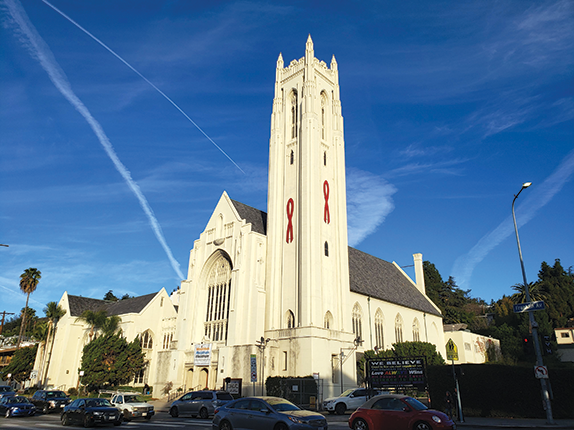 Hollywood Methodist is located just north of the intersection of Hollywood Boulevard and Highland Avenue. (photo by Cameron Kiszla)

A proposed deal to allow more conservative churches to split from the UMC and form their own denomination was announced earlier this month. The reason for the schism was LGBTQ rights – specifically gay marriage and LGBTQ clergy, both of which are important issues at the church in the heart of Hollywood at 6817 Franklin Ave.

Barnes said it’s important to note that as of now, it’s still a potential split, and it won’t be official until voted on at the church’s general conference in May. However, Hollywood UMC has begun to take action.

On Sunday, Jan. 5, the church congregation took a stand for LGBTQ rights and acceptance in the Methodist church, hanging a large “#ResistHarm” banner on the front of the church, a nod to the founder of Methodism, John Wesley, and his three simple rules: “Do no harm. Do good. Stay in love with God.” 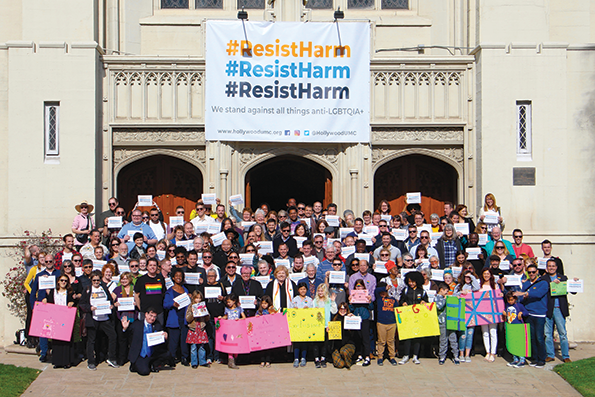 Tim Baudler, head usher at Hollywood UMC, said in his view, those who would reject LGBTQ clergy and gay marriage in the United Methodist Church are doing harm and not acting according to the teachings of God or Wesley.

“Jesus hung out with the oppressed, the judged. Why are churches doing the opposite? … Christians are supposed to take care of each other. That’s what we’re called to do as God’s children,” Baudler said.

When he came out as gay in his hometown in Iowa, Baudler said he was disowned by family, except for his mother. Eleven years ago, however, he found a new home at Hollywood Methodist, where the church’s pastor, the Rev. Kathy Cooper Ledesma, told him “we’re your family now.”

“The only thing I can see positive about this is that it’s encouraging to see the number of members and congregation that are fighting this ruling and resisting this,” Baudler added.

Not every Methodist church is as welcoming. Barnes said she’s had interactions with other Methodists who question her faith and call her identity “incompatible with Christian teaching.”

“There are still people here who are very traditional, conservative, right-wing Christians who are part of the Methodist Church and don’t agree [with gay marriage and LGBTQ clergy],” she said.

However, Barnes also noted that she’s also received “huge amounts of support, outpourings of love and adoration, and nowhere more so than my own church.”

Baudler said Hollywood UMC will push back against the anti-LGBTQ attitudes in other parts of Methodism, and he hopes others see that in Hollywood, there’s a welcoming “beacon of light.”

“We’re not going to change just because the people that don’t really understand the world want us to change. We are a very progressive church, probably one of the most progressive in the country, but we are not afraid to stand up and fight for equality of all God’s people,” he said.

Barnes said that support for her and other members of the LGBTQ community makes her optimistic for the future.

“It makes me hopeful that the harm meted out by organized religion against my identity is lessening. The children growing up in churches right now don’t have to worry about how the church will react to them if they discover that they’re not cisgender or heterosexual,” she said.