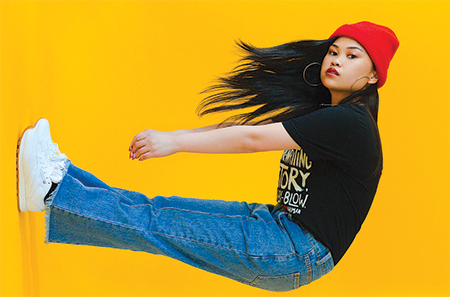 Ruby Ibarra will perform at the Getty Center on Feb. 15 and 16. (photo by Donna Ibarra/courtesy of the Getty)

Oakland-based rapper and spoken-word artist Ruby Ibarra takes the stage on Feb. 15 and 16. Listeners will hear stories reflecting the lives of immigrants and communities of color in Tagalog and Waray; these languages originate in the Philippines, just like Ibarra. Both are especially percussive languages: perfect for her voice and vision. She’ll be joined by contemporary and traditional musicians for an evening illuminating the social power of music.

Sounds of L.A. closes March 21 and 22 with one of Brazil’s most acclaimed contemporary musicians, Hamilton de Holanda. He is known for his tour-de-force compositions and stunning command of his instrument the bandolim, or mandolin. Starting his professional career at the tender age of five, de Holanda went on to reinvent the sound, style and technique of this beloved instrument by adding two extra strings.

The series is free; a separate reservation is required for each concert. All performances, which begin at 7 p.m. on Saturdays and 4 p.m. on Sundays, take place in the Harold M. Williams Auditorium at the Getty Center. Parking is $15; $10 after 3 p.m. For tickets and information, visit getty.edu/360.