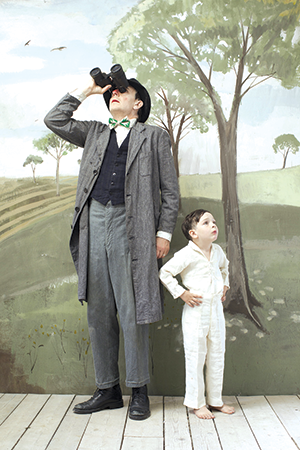 Galerie XII Los Angeles is celebrating its first anniversary with the solo exhibition of Milan-based photographer Paolo Ventura.  On view through Saturday, March 14, “An Invented World” is an exhibition spanning six of Ventura’s photographic series over the last decade, including the debut of new works.

“I’m happy to show some of my works spanning the last decade for the first time in Los Angeles,” Ventura said. “Cinema is a recurring theme in my work, and it resonates with the City of Angels.”

Widely known for his elaborate narrative series acted out by the artist and his family, the whimsical stories touch upon many facets of the human condition within life-size dioramic cityscapes reminiscent of war-time Italy, which are constructed entirely by the artist.

Galerie XII Los Angeles’ curatorial goal is to showcase the pioneering works of photographic artists from Europe and Asia to the Los Angeles community.

“Curatorially, Ventura’s work was a natural choice as it’s so visual and cinematographic,” said Valerie-Anne Giscard d’Estaing, founder of the gallery. “I still remember the impact of seeing his work for the first time in Paris in 2009 and am excited to share his work with a West Coast audience.”

The exhibition begins with Ventura’s third body of work “Behind the Walls” (2011), the first in which he began inserting himself into his images. The works on view then progress through his caricatured self-portraits in “Short Stories” (2012-2015) to more recent large-scale pieces from “Collages” (2017-2019), which make up a predominant portion of the exhibition.

Regular gallery hours are 11 a.m. to 6 p.m., Wednesday through Saturday, and by appointment.