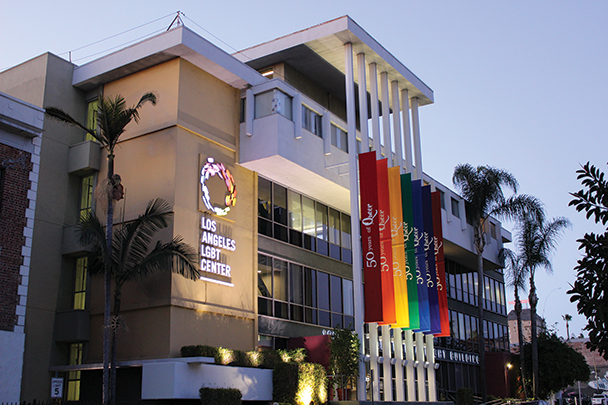 The Jeffrey Goodman Special Care Clinic, 1625 N. Schrader Blvd., is located in the McDonald/Wright Building and has provided holistic HIV treatment and services for 27 years. (photo by Morgan Keith)

On Jan. 27, the Los Angeles LGBT Center announced that free STD testing and treatment would cease after funding cuts from the Los Angeles Department of Public Health. Public outcry ensued, leading to a temporary agreement the next day to restore services through the end of March.

“The Los Angeles LGBT community saved the day. From phone calls to tweets and emails, their voices were heard and ultimately saved these vital services for our community,” said Lorri L. Jean, CEO of the LGBT Center.

Funding cuts were made last spring when DPH began renewing contracts with its community partners, according to Ward Carpenter, co-director of the center’s health services.

When grants were awarded last month, the center discovered that funding for core STD testing services dropped more than $1 million compared to the previous year.

DPH also announced on Jan. 16 that it would begin charging its community health partners for the county’s lab costs, which would result in an additional $1.5 million in costs for the center. Even with all its grant money put toward paying for labs, it would not cover the total costs and would end almost all free testing for an estimated 15,000 people.

“The center is one of the most trusted and cost-effective STD testing providers in the county, specifically because of our success ensuring that the LGBT community gets the care it needs,” Carpenter said. “As funding cuts choke off these services, STD cases in Los Angeles will soar and it will cost millions of additional dollars in testing and treatment. These changes are short-sighted, dangerous to the public health and bad for the taxpayers of Los Angeles County.”

Over the last five years, DPH data show there has been a 98% increase in primary and secondary syphilis cases, an 81% increase in gonorrhea cases and a 25% increase in chlamydia cases in the county.

The epidemic disproportionately impacts gay and bisexual men, women, transgender people and people of color, according to DPH data.

“This is not a solution. All we have is a very temporary agreement to allow us to maintain these critical services through the time being until we are able to sit down with the county to negotiate some sort of sensible solution that allows us to continue combatting these epidemics,” Carpenter said.

Inquiries sent to DPH representatives and County Supervisor Sheila Kuehl, 3rd District, about why funding was cut were not returned. The County Board of Supervisors oversees the DPH. Kuehl’s office issued a statement.

“[My colleagues and I] only recently heard about these proposed funding cuts,” Kuehl said. “We are working closely with the center and the Department of Public Health to resolve the issue and ensure that the center can continue to serve a vital role in the county’s system of free STD testing and treatment services.”

Free STD testing and treatment and pre- and post-exposure prophylaxis services are currently offered by the center.

The center plans to work with DPH to find a long-term solution.

“We are hopeful, but nothing is guaranteed,” Jean said.

For information on services and getting tested, visit lalgbtcenter.org.

Enjoy the eggplant at edo by Edoardo Baldi

Street closures in Hollywood for 2020 Oscars