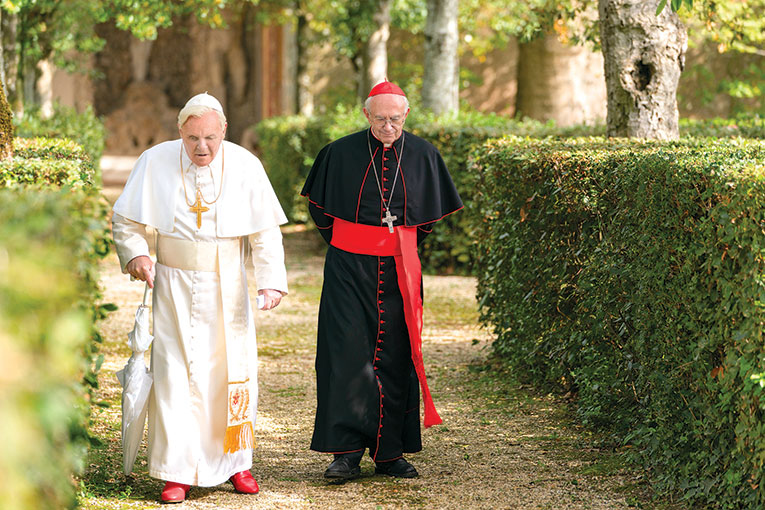 When Pope Benedict XVI resigned, something done by only one pope 600 years prior, Pope Francis breathed new life into Catholicism. That’s the position of Netflix’s “The Two Popes,” which depicts conversations between the two men, leading to Benedict’s shocking exeunt. Certainly, this is expertly crafted cinema by director Fernando Meirelles (“City of God,” “Blindness”), but it could have ascended even higher with a more involved screenplay willing to truly get dirty with more facts along with its bromance optimism.

The story is simple enough: Cardinal Jorge Bergoglio (Jonathan Pryce) wishes to resign, frustrated that the Catholic Church isn’t progressing. But Benedict (Anthony Hopkins) refuses his request, instead forcing the man who would become Pope Francis to engage in several days of debate about theology, church politics and an assortment of other topics. Amidst this, we also drift into Bergoglio’s tumultuous history, especially during the Dirty War in Argentina.

In an odd choice, however, no such background occurs for Benedict, who remains largely stoic, occasionally the champion of wisdom Hopkins employs in many a film. To be clear, the guy forced to participate in the Hitler Youth at 14, the law of the land for those his age, doesn’t get any backstory. Again, odd choice.

As for its historical accuracy, well that’s a non-starter. The film is adapted from a play, which idealizes and sometimes caricatures the pairs’ jagged parts. If the result speaks truth, then such choices justifiably work. But in at least one instance, Francis appears the hero against a serial pedophile when that modest victory belongs to Benedict. This is perhaps the great sin of screenwriter Anthony McCarten’s (“The Theory of Everything,” “The Darkest Hour”). His brand of historic melodrama so beloved by awards voters permits delightful, satisfying cinema, but little more.

In “Theory,” he avoided discussing actual physics, “Darkest” features no political jargon at all, and “Popes” condenses each individual into clear, mundane categories: traditional and progressive. Benedict’s concern for climate change, ignored. Same for Francis’ spotty record on reporting pedophile priests. “Popes” sands too far, providing fun material for discussion about basic theological topics when it could be a master class in ecclesiology.

Perhaps this is overly harsh. “The Two Popes” is actually better than several contenders for best pic. If only it cared more about depth than sentimentality.

Taika Waititi (“Thor: Ragnarok,” “What We Do in the Shadows”) is an incredible director, writer and actor. His episode of “The Mandalorian” sends season one out on an amazing high. His mo-cap performance of Korg (the rock guy) in a couple Marvel flicks is hilarious. And all his future projects, another “Thor” film and perhaps a “Star Wars” one too, are insanely exciting. 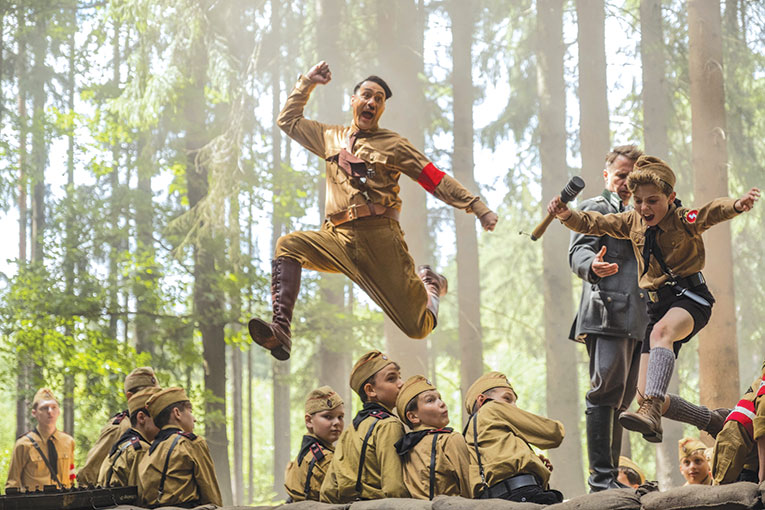 As for his World War II satire up for best pic and an AFI top 10 film of 2019 – featuring Waititi as an imaginary friend Hitler – it’s OK. Some parts work well, but the satire lacks bite, and any actual laughs are almost entirely absent. It might just be Waititi’s weakest film to date.

Despite these shortcomings, every performance succeeds, from first-time actor Roman Griffin Davis as Jojo – a Hitler Youth member whose faith in the Third Reich wavers – to Thomasin McKenzie (“Leave No Trace”) as Else – a Jewish girl hiding in Jojo’s attic and reason for the boy’s change of heart. The cast also proves memorable: Sam Rockwell as an indifferent Nazi general, Rebel Wilson rocking her usual brand of humor and Scarlett Johansson as Jojo’s mother, perhaps the most complex character in the entire film.

Disappointingly, Waititi’s take on idiot Hitler, an oaf in Jojo’s head, amounts to a minor role. His juvenile antics work double time as equal parts the product of a naive imagination and a cathartic dig at one of history’s most monstrous figures. Such a premise works great on paper, but it never delivers the one-two punches “Jojo Rabbit” needs, especially as things transition from comedy to sincerity, rather than combine both.