Fonseca exhibit at the Autry closes this weekend 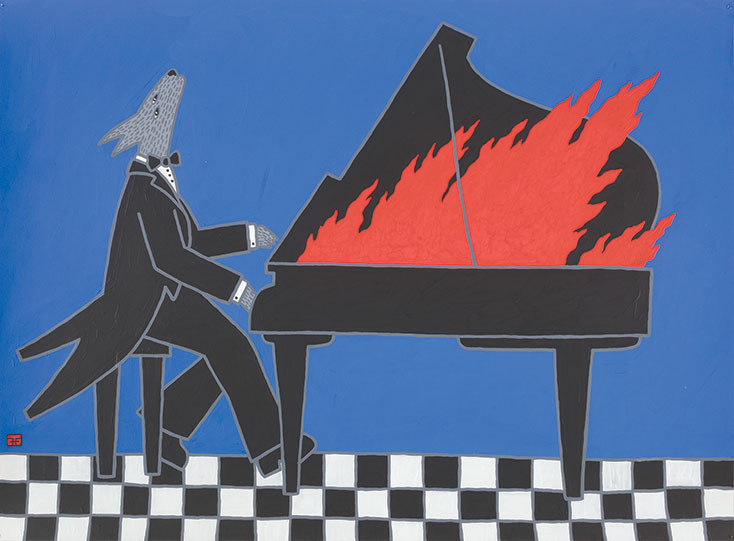 The Autry Museum of the American West is encouraging visitors to see the exhibits “Coyote Leaves the Res: The Art of Harry Fonseca” and “Indian Country: The Art of David Bradley” before they close on Sunday, Jan. 5.

The Fonseca exhibit includes 60 paintings, sketches and lithographs. In running concurrently with the Bradley works, the exhibits represent the Autry’s exploration of contemporary art from Native America.

Fonseca is best-known for his depiction of “Coyote,” a colorful trickster who leaves the “res” (reservation) and re-appears in non-traditional settings. The “Art of Harry Fonseca” exhibit focuses on “Coyote’s” role as an avatar for the artist and a metaphor for exploring his creative, artistic and ethnic identity in contemporary times. As a gay man and a person of mixed heritage, Fonseca used his art as a vehicle for self-discovery and a means of navigating different aspects of his life and identity during a time when ideas about Native peoples were often driven by outside forces including commercial markets, tourism and historical clichés.

“Fonseca’s great contribution was in bumping up against and crossing confines that were never previously engaged. His work spoke both internally, to Native Americans, as well as externally, with those outside the ‘res,’ and nimbly traversed artistic and cultural boundaries with ideas about Indianness,” said Autry President and CEO W. Richard West, Jr. “It was Harry who got us past this unidimensional view of what ‘Indianness’ is.”

“Indian Country: The Art of David Bradley” includes 32 paintings, mixed media works and bronze sculptures. It explores the artist’s four-decade career and his body of work, a combination of personal experience, social observation and the influence of icons such as Leonardo da Vinci, René Magritte and Andy Warhol.

“The Autry aims to confront and address outdated understandings of Native art, and this exhibition apprehends old ideas and turns them on their head. David Bradley’s paintings are accessible, imaginative and absolutely reflective of our mission to share the diverse stories and perspectives of the American West,” West added. The Autry Museum of the American West is located at 4700 Western Heritage Way. For information, visit theautry.org.

Kindle the holiday spirit at ‘Lights On at LACMA’