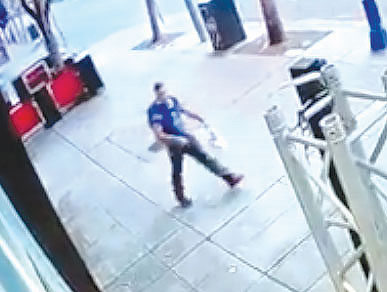 A security camera captured an image of a suspect who allegedly scrawled graffiti on the front of a business in West Hollywood. (photo courtesy of the LASD)

Detectives from the West Hollywood Sheriff’s Station are investigating separate incidents of vandalism that occurred on Dec. 29 and Dec. 31 at businesses on Santa Monica Boulevard.

The first incident occurred at the Bayou WeHo at 8939 Santa Monica Blvd. on Dec. 29, followed by a second incident at the Block Party store at 8853 Santa Monica Blvd. on Dec. 31. Authorities released a security camera video of a male suspect who allegedly scrawled graffiti on the front of the Block Party and are asking anyone with information to contact detectives. Both incidents are under investigation, said Deputy Todd Mohr, with the West Hollywood Sheriff’s Station.

The graffiti at Block Party occurred between 2 and 8 a.m. on Dec. 31 and allegedly included what appeared to be a Star of David symbol. Mohr did not have any further information about the vandalism on Dec. 29.

Mohr said on Jan. 2 that the vandalisms had not been classified as hate crimes, although detectives will make that determination later.

“That’s part of the investigation,” Mohr said. “There is heightened awareness with what’s been going on lately, and we want to make sure we get to the bottom of it.”

In recent weeks, authorities have investigated multiple anti-Semitic crimes throughout the United States, including separate incidents of vandalism in Beverly Hills and Los Angeles. On Dec. 14, a male suspect broke into the Nessah Synagogue in Beverly Hills, damaged religious relics and vandalized the interior, police said. A suspect, Anton Nathaniel Redding, 24, was arrested four days later after fleeing to Hawaii and was returned to Los Angeles to face vandalism, burglary and hate crime charges.

On Dec. 19, a male suspect was arrested by Los Angeles Police Department detectives for allegedly scrawling graffiti on numerous cars in the Pico-Robertson and Beverlywood neighborhoods and on Jewish schools on Mulholland Drive. Those crimes allegedly occurred on Dec. 14-15. The suspect, Israel Herrera Perez, 44, faces vandalism and hate crime charges.

West Hollywood authorities are also investigating whether the graffiti scrawled on the cars and schools in Los Angeles is linked to a series of similar incidents that occurred overnight between Dec. 14-15. In that case, graffiti was spray-painted on 10 cars parked on Norwich and Westbourne drives and Rosewood Avenue. Lt. Bill Moulder, with the West Hollywood Sheriff’s Station, said detectives are still searching for video and other evidence that may link the crimes. The car vandalisms in West Hollywood have not been classified as hate crimes.

The suspect in the vandalisms at the Bayou WeHo and Block Party is a white man who was carrying a bag and wearing a backpack. Anyone with information is urged to call detectives with the West Hollywood Sheriff’s Station at (310)855-8850.