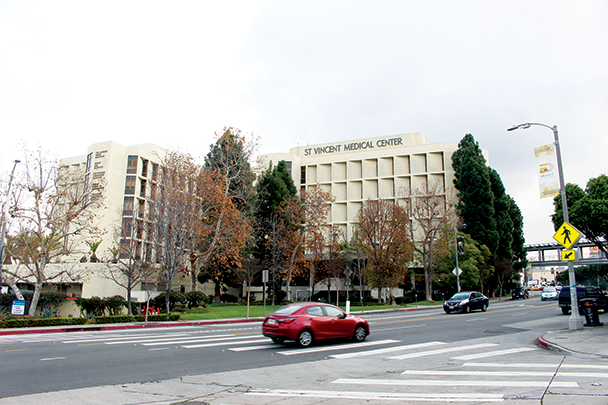 “My philosophy is that anyone that’s in-the-know about the [housing and homelessness] crises and public resources knows that this is a real opportunity site, and if there’s a time to make a move, it’s now,” O’Farrell said.

St. Vincent facilities include 366 hospital rooms, adjoining medical facilities, a parking garage and other structures that the motion suggests could serve as temporary lodging and provide wraparound services.

“So far, when we’ve opened bridge housing or winter shelters, we’re usually talking in dozens,” O’Farrell said. “This is hundreds of beds for people to get shelter and the medical assistance that they need in one spot.”

Rather than searching for property to acquire elsewhere in the city and build temporary housing from scratch, O’Farrell said that the existing facility could be adapted.

“Repurposing the facilities could greatly reduce the cost per unit and take advantage of existing infrastructure that is time-consuming and costly to build,” the motion reads.

O’Farrell said that he anticipates opposition to the idea of purchasing and repurposing the hospital, but that it could become the largest facility in the city to provide this type of care.

“If we could get help for 500 people at a time, that is a larger drop in the proverbial bucket than a few dozen,” O’Farrell said.

“This decision is not taken lightly and comes only after exhausting every option to keep the hospital open,” Adcock said. “Following its closure, Verity will pursue an alternative sale path for St. Vincent Medical Center – it is our hope that a future buyer will be able to identify a use that honors the facility’s decades-long legacy of service to the community.”

Strategic Global Management Inc ., an affiliate of KPC Group that was handling the acquisition, disputes this claim, stating that Verity failed to satisfy all material conditions in the purchase contract prior to seeking its closing date.

The hospital and most of its facilities will be put up for auction. On Feb. 5, the City Council’s Homelessness and Poverty Committee will consider the motion to purchase and repurpose the hospital.

With its closure set for Jan. 27, St. Vincent has arranged a transfer agreement with Good Samaritan Hospital and additional facilities within a 3-mile radius for the transfer of patients and special services, including its transplant program. St. Vincent Meals on Wheels will continue its operations and will not be included in the auctioned property, according to O’Farrell.