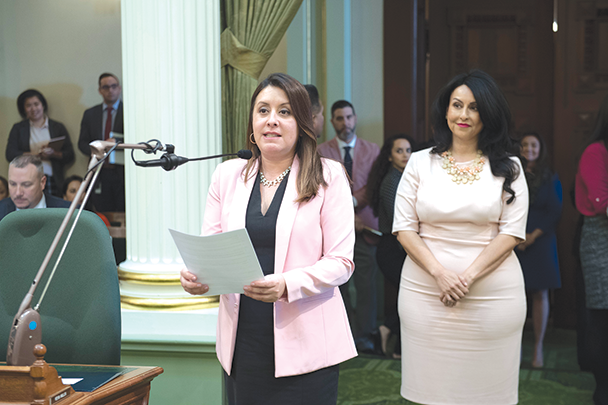 Earlier this month, Martinez became the first Latina elected to serve as Los Angeles City Council President. Martinez was born and raised by Mexican immigrants in the San Fernando Valley. She was elected to the City Council in 2013 and was the only woman elected official in the city of Los Angeles at the time. She is currently one of only two women on the City Council, having been joined by Councilwoman Monica Rodriguez, 7th District, in 2017.

“Nury Martinez is truly a role-model. She has shattered the glass ceiling for Latinas time-and-time again,” Rivas said. “Growing up, there were no women that looked like us in positions of power and having that representation matters. I am encouraged to know that little girls all over our state can see that through hard work and dedication, any dream is within reach. Nury Martinez is the embodiment of California values, and I am proud to call her my friend.”

“It is an honor to be recognized at the California State Legislature,” Martinez said. “I thank my friends Assembly Member Luz Rivas and Sen. Maria Elena Durazo for their support. As Latina legislators and as children of immigrants, I hope we inspire little girls across the state to dream big, work hard and know that they will be next. I look forward to working with my state partners to push a families-first agenda to help working poor families, women and children throughout the state and the city of Los Angeles.”

Martinez is an advocate for working families, children, environmental justice and resolving the housing and homelessness crisis. She led the effort to raise the minimum wage to $15 an hour in Los Angeles and is currently leading an effort to expand paid parental leave for all parents. For information, visit nury-martinez.com.