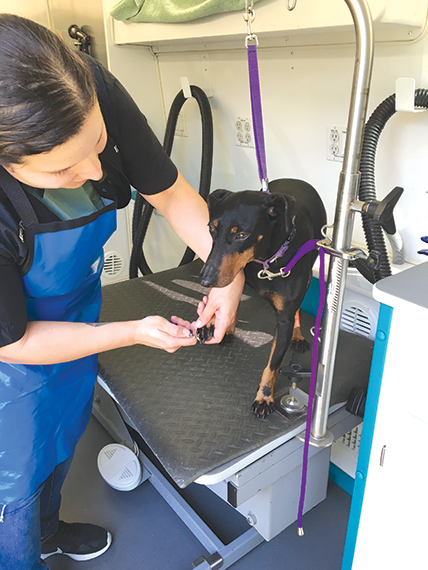 At a Jan. 28 study session, the Beverly Hills City Council deliberated on the final details of an ordinance aimed at reducing occurrences of animal injuries and death in grooming establishments, which it plans to introduce in March.

A number of protections would be implemented for animals during grooming sessions including installing video recording systems, requiring staff accreditation from a grooming school and prohibiting the use of grooming nooses, which tether animals to a surface or table.

Grooming nooses tighten after being placed around the head or neck of an animal and are not limited when pressure is applied. Grooming loops can be used for the same purpose but have tightness restrictions.

Council members spent the most time discussing a grandfather clause about accreditation they added to the ordinance, which was modeled after West Hollywood’s ordinance, at a meeting last April. The clause would provide an exemption for animal groomers who have worked in the industry for a minimum of seven years from needing grooming school accreditation.

“Seven years to me seems like a relatively long time period that if someone was working full time for five years, that would be sufficient,” Councilman Robert Wunderlich said.

Councilman Lester Friedman suggested that the clause specify full-time employment since mobile groomers may only work on weekends or a few days a week and still qualify for the accreditation exemption.

“I don’t know that that’s fair. There are people that are groomers that it’s not their full-time job,” Councilwoman Lili Bosse said.

The council ultimately decided to leave the clause broad to allow flexibility for code enforcement staff to enforce the ordinance. Still, some groomers are worried that the extra requirements would burden their businesses with additional costs.

“I think there needs to be some sort of safety regulations, but they’re going overboard,” said William Recinos, co-owner of VIP Mobile Dog Grooming. He added that the council’s request for all groomers to have professional certification is asking too much.

Other stipulations added to the ordinance at the council’s April meeting include the installation of high-definition video cameras in all bathing and styling areas in grooming facilities, as well as the implementation of a video storage schedule. Self-grooming establishments, where owners can groom their own pets, are exempt from this requirement.

“I think a lot of times when they come up with these ordinances they’re trying to pass, they don’t know how it really works inside [grooming establishments] and mobile grooming vans,” Recinos said. “When it comes down to the whole video recording, it’s going to be more costs for a lot of groomers that are smaller companies.”

The fiscal impact section of the staff report listed costs associated with the issuance of permits, administration of the program and inspection of animal grooming businesses, which would be recovered through an annual permit fee of $149.

City staff said that letters will be sent out to mobile groomers about the ordinance, permit fee and future meetings. Mobile groomers in Los Angeles will be notified of the ordinance requirements in case they want to conduct future business in Beverly Hills.

Next steps include a public hearing for a permit fee adoption, which will be addressed at a future City Council meeting before the ordinance is introduced.

Bill would create free tuition in CSU system for transfers