Council candidates get down to business 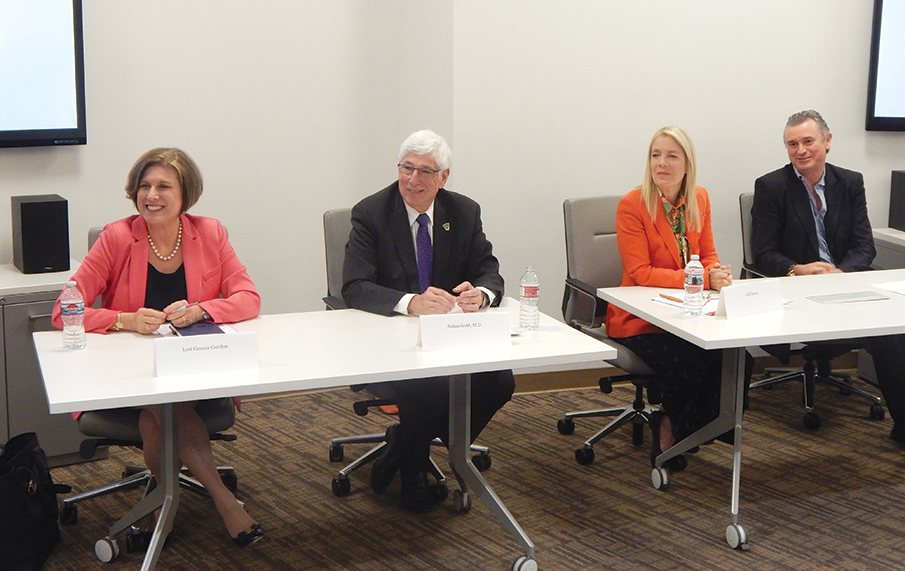 On Jan. 21, business was the focus of the Beverly Hills Chamber of Commerce’s forum for City Council candidates.

Four of the five contenders – Planning Commissioner Lori Greene Gordon, incumbent City Council members Dr. Julian Gold and Lili Bosse, and member of the city’s Technology Committee Robin Rowe – participated. The other candidate, Rabbi Sidney “Simcha” Green, was absent due to the recent death of his daughter, said moderator Mark Egerman, who serves on the chamber’s board of directors.

For two hours, the candidates took questions from Egerman and the audience, presenting their pro-business qualifications to the chamber members. The majority of the conversation focused on how to help Beverly Hills thrive economically, including topics like tourism and building a strong business community, but ongoing council projects like La Cienega Park and the Complete Streets Plan were also discussed.

On tourism, Gordon said she’d like to see a better marketing plan to bring visitors to Beverly Hills as a whole, not just Rodeo Drive. She added that merchants might provide valuable feedback in helping the city craft its message.

“I really think the goal is to determine what communities should be like in each different area and market those communities,” Gordon said.

Gold, who was first elected to the council in 2011, said he’d like the city to continue to build on its well-known reputation as a center of luxury.

Bosse, who also has served since 2011, agreed with Gordon that the city is more than just Rodeo Drive, but stressed that Beverly Hills needs to be more welcoming to different people and offer different experiences at different hours of the day.

“We are really an amazing city that has a lot to offer to many people of different ages and different socioeconomic abilities,” Bosse said.

Rowe, a technologist and innovator, said instead of going head-to-head directly with surrounding tourist attractions, Beverly Hills should become more like Universal CityWalk, using a skyway to connect Beverly Hills to the Westfield Century City mall, the Beverly Hilton and the Beverly Center mall.

“We can make shopping be bigger and be a destination for this entire community … instead of having to compete with our neighbors on either side,” Rowe said.

As for what types of businesses Beverly Hills should recruit, Gold said it must be taken into account that each area of the city is different, but as a general rule, he would like to see more businesses and institutions that bring visitors to the city.

“We need to be looking for things … which draw people to us, and in the residential areas, you need things that support residents,” Gold said.

Bosse said the city needs to search for businesses that can’t be found anywhere else, especially restaurants, which can serve as neighborhood anchors and keep the city “alive” during the day and night.

“We can go out and recruit them and tell them we want them, but we have to make it so it’s easy for them to open up,” Bosse said.

Rowe said Beverly Hills is already working to bring businesses to the city, but it could do a better job of incubating new companies. Rowe also suggested the city could host events like car and fashion shows to further aid local businesses.

“We’ve been looking outside. We need to look more inside,” Rowe said. “How can we encourage residents to create businesses here?”

Gordon suggested using the recent struggles of the retail industry to bring in new types of companies, such as experiential businesses, to make the city more attractive, especially to young people. She also pushed for free nighttime parking for residents.

“I think the businesses we need to identify are the kinds of businesses that will bring in a broad swath of people and will stay open perhaps at night,” she said.

While the candidates found much common ground on many topics, the divide between the challengers, Rowe and Gordon, and the incumbents, Bosse and Gold, became most pronounced when an audience member asked about the Complete Streets Plan and the La Cienega Park renovation project.

Rowe said he was “nervous about these projects,” but is still neutral and has not yet come to a final decision on whether he would support them. However, he did raise concerns about the city’s penchant for going over budget on large projects. The La Cienega Park renovation project’s budget could be more than $100 million.

Gordon was more forceful in her criticism, saying the Complete Streets Plan, while important to secure grant funding from the state, won’t fix the immediate congestion issues in the city. She also chastised the council for envisioning the park before establishing a budget.

“The way I operate businesses is I have a budget, I learn what I can work with and then I make the decisions as to what the project entails,” Gordon said.

Gold said Complete Streets is intended to help get people out of their cars, which will ease traffic issues. He also defended the public outreach process and projected cost of the park.

“The park as we build it next will last 50 years, 100 years,” Gold said. “So it’s going to be expensive, but I think it would be short-sighted and foolish to skimp on it, because it will support this community for a long time.”

Bosse took a stand against removing residential parking, a complaint of some Complete Streets opponents. Bosse added that for the park, once the city has a budget, the public can help decide what should and should not be included.

“We want the sky’s the limit, but it might not be something that we can afford to put our money toward,” Bosse said.