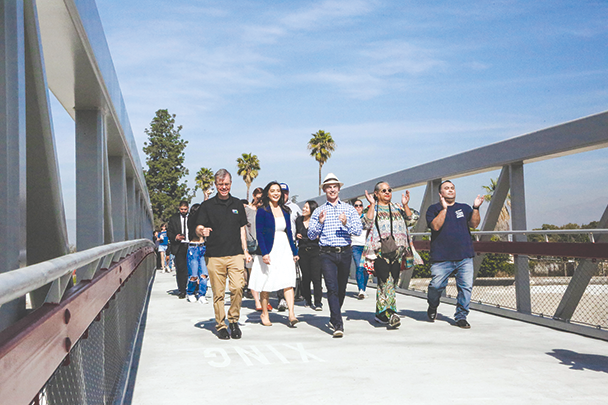 Los Angeles City Councilman Mitch O’Farrell, 13th District, came together with residents on Jan. 25 to celebrate the opening of the Red Car Pedestrian Bridge, one of five major infrastructure improvements along the Los Angeles River.

Hundreds of community members joined O’Farrell to cut the ceremonial ribbon on the new Red Car Bridge. After the ribbon-cutting, O’Farrell and the community participated in the first official crossing of the bridge, along with the jazz band from John Marshall High School.

“The Red Car Pedestrian Bridge has been a 16-year labor of love for all involved, benefitting residents of Atwater Village, Silver Lake and all who enjoy the river,” O’Farrell said. “The design of this new bridge also pays tribute to the historic Red Car Trolley that once crossed the river in the exact same spot. I want to thank Friends of Atwater Village, Netty Carr, Luis Lopez and Sandra Caravella for envisioning this project so long ago.”

“As someone who lives near this part of the Los Angeles River, I am excited that this pedestrian bridge, years in the works, is opening for us residents to access and enjoy,” Carr added. “I appreciate the ongoing collaboration that residents like myself had with Councilmember O’Farrell’s office and the Bureau of Engineering.”

The Red Car Pedestrian Bridge connects Silver Lake and Atwater Village. It provides much needed accessibility for pedestrians and other non-motorized uses, which is especially important as the councilman and the Bureau of Engineering embark on a three-year seismic retrofit and historic restoration of the Glendale-Hyperion Complex of Bridges starting in 2021.

“Every project we complete along the river helps connect nearby residents to the bike path and to each other,” Los Angeles City Engineer Gary Lee Moore said. “The completion of the Red Car Pedestrian Bridge makes the river more accessible and is another step in the city’s ongoing revitalization of the Los Angeles River.”

The North Atwater Bridge will come online in the coming weeks, and Taylor Yard Bridge is expected to be completed in 2021. Another bridge, connecting Atwater Village with Glendale, is in the early planning stages.