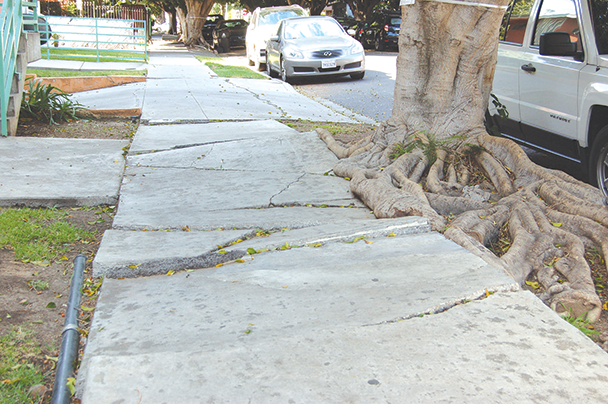 The city is working on a program that would focus on ways to preserve trees when sidewalks are repaired. (photo by Edwin Folven)

The city of Los Angeles has released a draft environmental impact report for its proposed sidewalk repair program and is asking the public to review the plan and provide public input through Feb. 24.

The proposed plan is being reviewed by the Greater Wilshire Neighborhood Council’s Sustainability Committee. The committee will further review the plans during its meeting on Feb. 4, at 7 p.m. at Marlborough School, 250 S. Rossmore Ave.

The sidewalk repair program has been under review over the past four years and the city has created a plan to enable repair projects while maintaining trees and landscaping. The draft environmental report was released so the public can provide ideas and suggestions on how to make improvements.

“This is an important priority for us and a lot of people,” said Julie Stromberg, chair of the GWNC Sustainability Committee. “I want people to become more engaged in local government and preserving and enhancing our urban forest. It’s time we take a look at what we have and preserve it.”

The sidewalk repair program was created after the city reached a settlement in a class-action lawsuit in 2016 filed by disability rights advocates who were concerned that broken sidewalks limited mobility. The city committed to spending $1.4 billion on sidewalk repairs as part of the settlement in 2016 and the draft EIR outlines guidelines for conducting the repairs.

The draft EIR includes objectives such as retaining existing street trees when repairing sidewalks or replacing them in situations when trees must be removed. The proposal also calls for a streamlined process for repairing sidewalks so each individual project does not need extensive environmental reviews. The proposal and public input will be incorporated into a holistic approach to be adopted by the city in the future.

Stromberg said she hopes the city will include approaches such as “meandering” sidewalks that wind around tree trunks and roots when repairing sidewalks. An example of ways new approaches could work came in 2018 when the city preserved numerous ficus trees on Cherokee Avenue in Hollywood after further analysis determined that walkways along the street could be repaired using methods such as shortening the width of sidewalks instead of cutting down the trees.

The report can be read and comments can be made by visiting sidewalks.lacity.commentinput.com. Comments may also be emailed to shilpa.gupta@lacity.org through Feb. 24. Emails should include “SRP DEIR” in the subject line, as well as contact information from the sender in the body of the emails.

A series of citywide public meetings will be held on the proposed plan from Jan. 29 through Feb. 15. The meetings closest to the local area are on Feb. 5, from 6 to 8 p.m. at the Lafayette Multipurpose Community Center, 625 S. La Fayette Park Place; and on Feb. 12, from 6 to 8 p.m. at the Westchester Senior Citizen Center, 8740 S. Lincoln Blvd. For information and full list of the meetings, visit sidewalks.lacity.org/environmental-impact-report.