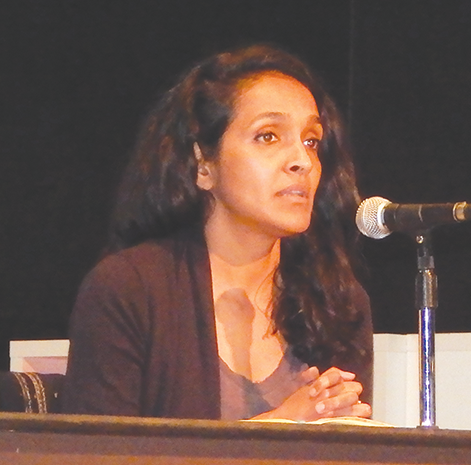 Two candidates for the upcoming election in the Los Angeles City Council’s 4th District came together for a forum at the Greenway Court Theater on Jan. 13, but the third candidate in the race was conspicuously absent: incumbent David Ryu.

The forum was held by the Mid City West Community Council and included candidates Sarah Kate Levy and Nithya Raman. Ryu’s campaign spokesman Daniel Eyal said the councilman did not attend because he did not believe the forum would be impartial. 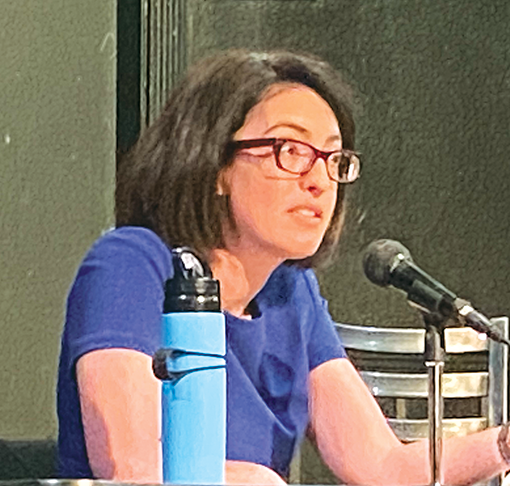 Eyal cited an article published on Streetsblog LA in which Mid City West Transportation Committee chairman Michael Schneider, who said he also founded the registered political action committee Streets for All, stated that the PAC is supporting Levy in the 4th District council race. Eyal added that Ryu is willing to participate in other upcoming election forums, none of which have been scheduled yet, but he decided against participating in the event on Monday evening.

“Councilmember Ryu believes in honest and open conversations with residents across Council District 4. Unfortunately, that’s not what this was,” Eyal said in a statement. “An event in which one of the hosts has already announced interest in running an independent expenditure against Councilmember Ryu is less a candidate forum and more a politicized event with a predetermined outcome. Councilmember Ryu will continue to have more open conversations with folks across the district on the important issues facing working families and building a Los Angeles for all.”

The Mid City West forum was moderated by independent journalist Marissa Gluck, and there was no mention of Schneider or support for any candidate. Levy and Raman outlined their visions for the district and answered questions posed by Gluck. Mid City West Board Chairman Scott Epstein expressed disappointment about Ryu’s absence and added the intention was to provide a forum so the community could be informed. He said many members of the council have already personally decided who they are supporting in the race, some backing Ryu, but the candidate forum was an impartial event and the council is not taking sides.

“This event was planned by members of our board in a committee who don’t have any ties to any of the campaigns,” Epstein said. “It’s about our stakeholders. We were providing a forum so our stakeholders, the voters, could hear from the candidates first-hand.”

Approximately 50 people attended the forum, which covered issues such as homelessness, affordable housing, transportation and education. Both Levy, a writer and women’s advocate, and Raman, a homeless advocate and nonprofit leader, said the affordable housing crisis and homelessness are intertwined, and are among the most pressing issues affecting the district and the city. Levy proposed using city parking lots, many of which are empty at night, to allow people living in vehicles to park overnight and others to camp in tents. Raman said neighborhood service centers are needed in every community so caseworkers can get to know people experiencing homelessness on a personal basis and can help direct them to resources.

“I think [homelessness] is the most important issue facing Los Angeles right now,” Raman said. “I think we need to do a much better job of addressing the needs of people experiencing homelessness right now. It’s incredibly hard to get the help that you need when you’re on the streets and I think we need to have a network of community access centers across the city where people can speak to a case manager, build relationships of trust with mental health case workers and case managers and start their journeys off the streets.”

Levy agreed that homeless is the most pressing issue, and outlined ways to find places for homeless individuals to stay while permanent housing is secured.

“In our district, homelessness went up by 53% in one year. It’s a shocking jump, because in our city in the same period of time, it only went up 16%. That, to me, says what our councilman has been doing has been slow and ineffectual,” Levy said. “Thirty-seven thousand people are sleeping on our city’s streets. If we would have had a natural disaster that put those people in the streets, we would have mobilized immediately, but the fact is, we have seen that happen in our city. During the fires in the fall, we were opening shelters. We should have been doing the same thing for decades, and we should do it today. This first step is safe parking and safe campsites on city lots. We have a lot of city parking in this city and we should be using [them] today for safe parking with wraparound service like bathrooms and showers and mental-health counseling and addiction counseling so it operates as if it was supportive housing. If we create safe parking sites and safe camping sites, we will then be able to clear our sidewalks, because they will provide a safe place to go.”

Both candidates also said the homeless crisis is intertwined with a lack of affordable housing in Los Angeles.

“We cannot address our homelessness crisis without also preventing the fall of people into homelessness,” Raman said. “You can [prevent people from becoming homeless] by providing things like right to legal counsel when you’re facing eviction and increasing the number of people who are eligible for rental assistance, by instituting a rent freeze in all the apartments that are controlled by the rent stabilization ordinance. If you don’t stop the flood of people into homelessness by using every tool in our toolbox, we will never address this crisis. We are not building the kind of housing we desperately need. We are not building deeply affordable housing. We need to think about how we can really do that in Los Angeles.”

“We have to build supportive housing. We know this, but it’s very expensive and very slow to build, and while we are trying to do that, people are dying in the streets. They are becoming less stable and they are under threat of attack,” Levy said. “We need to create a healthy environment for small business to grow here so we can continue to fill our coffers and offer the services we are going to need for as many years it takes.”

The candidates also addressed Senate Bill 50, state legislation that would make it easier for multifamily housing to be built along transportation corridors and around transit hubs. The state legislation has been opposed by many municipalities because leaders believe it would take away local power over zoning.

“We are in a housing crisis. We are 500,000 units short of the housing we need in this city, and that has caused a major spike in rent and has caused a spike in housing prices. It’s really important to me that our communities have a voice in how we solve this problem, and I think just saying no to every idea punts the conversation out of our laps, where we should be having it, and cedes control to Sacramento,” Levy said. “[A] new version of SB 50 does something that I think should help our city lead on housing, and that is it gives local communities two years to come up with a better plan. We should be building the way we used to build. We should be building duplexes and triplexes and fourplexes that made the neighborhoods in this district so special to begin with and are in keeping with the character of the neighborhoods they are in. We should also take every opportunity we can to build more densely around transit and encourage people to use transit in those buildings.”

Raman said building housing is paramount, and she is uncertain how much of an impact SB 50 will have on the homelessness crisis.

“As a city council member my job, whether SB 50 passes or not, is the same,” Raman said. “I think even the most fervent advocate of SB 50 would not argue that it addresses not completely enough our homelessness crisis and our affordable housing crisis in Los Angeles. It would take many, many years before that housing could be built and before the trickle-down effect of having more housing on the market will actually have serious impacts on housing costs here, or on the kind of housing that will actually catch people as they are falling into homelessness.”

The candidates also addressed transportation and congestion, with both advocating for more innovative ways to get people moving more quickly. Both said more public transportation is the answer to reduce the number of cars on the streets.

“An increasing number of people who work in L.A. drive to work every day, and this is very much rooted in the fact that we are not building the type of housing that people who work in L.A. can afford,” Raman said. “I think addressing our housing crisis in some ways is also addressing our traffic crisis, and it will also address our bad air because as people drive more, smog-producing pollution also increases and our air gets worse and worse. It’s incredibly important that we are thinking about traffic in a much more holistic way. It’s incredibly important that you have somebody in office … who will fight for changes we so desperately need. We need a lot more buses on the streets and we need them to run more regularly if we want people to use them.”

Levy said she has first-hand experience in using public transportation and the challenges in increasing public usage.

“I ride transit. I ride DASH, I ride the buses and I ride the trains. I know the only solution to our transit problems is to invest in transit. We are in the place we are in now because we cut so much service that people had to get back into cars,” Levy said. “There are many of us who have to keep driving … but there are also many of us who want to take the bus and want another option. For those of us who want another option, we need DASH buses in every single neighborhood and they need to run every 10 minutes and not every 45. We need protected bus lanes on every street that used to accommodate a streetcar.”

Creating more housing was also a component of the candidates’ approach to improving education, as a lack of affordable housing has caused families to leave the city and take their children with them, they said. With fewer families having children attending public schools, government funding for education has been reduced, thus reducing the quality of education provided.

Levy and Raman added that they are in the process of building support for their campaigns and are looking forward to meeting people in the community. They both expressed disappointment in Ryu not participating, and are hopeful they will have a chance to discuss the issues with him present at future forums.

“I am disappointed he [was] not here but am not surprised,” Levy said.

“I think it’s really important for residents to have the opportunity to hear candidates and seated elected officials,” Raman added. “I am disappointed that Councilmember Ryu has elected not to do that.”

The primary election will be held on March 3.

This article was updated at 4:47 p.m. on Jan. 23 to reflect that Michael Schneider claims Streets for All is a registered PAC.

FYI – Streets for All is not a registered PAC that I have been able to find on any registered sites.