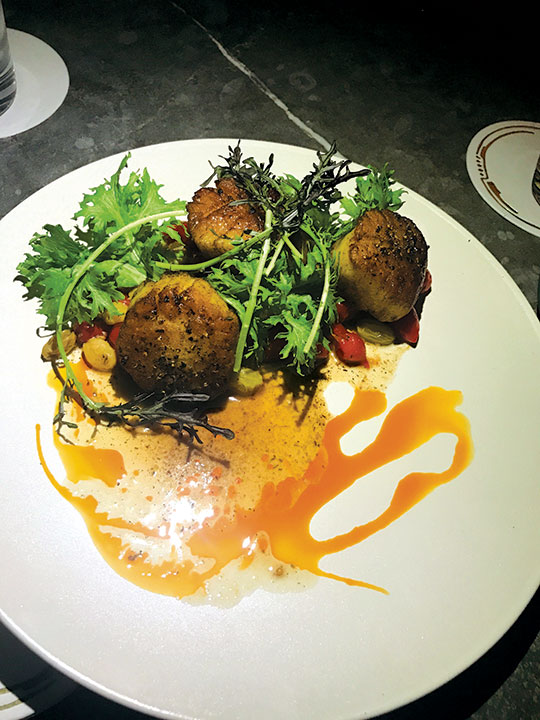 The caramelized scallops are seasoned with Mediterranean spices at Calabra at the Santa Monica Proper Hotel. (photo by Jill Weinlein)

When the rooftop restaurant Calabra opened just blocks from the beach, it instantly became a popular destination to meet friends for a cocktail and dinner, especially on warm nights. The creative fare, imaginative cocktails and inviting music playlist make it an entertainment epicenter on the west side.

Located at the luxury Santa Monica Proper Hotel, Calabra was designed by Kelly Wearstler, who created an ambiance with soothing colors and textures. When the sun sets, the atmosphere becomes more dramatic and romantic as candles flicker throughout the lounge area.

Being led through the lively, oval-shaped bar, we sat at a low table with mid-century bamboo chairs. The menu, prepared by executive chef Kaleo Adams, who served for years as executive chef at the Beverly Hills Hotel, carries an array of local dishes with a Mediterranean flair.

Our server Tanya made a few recommendations from each section on the menu, advising us to share around the table. We ordered a variety of mezze bowls that included creamy burrata, hummus and baba ghanoush to enjoy with a Sandia Punch. The libation is made with mezcal, aperol watermelon, parsley, fennel and cracked pepper, and a creative margarita-style drink made with Pueblo Viejo tequila, prickly pear and citrus juices.

A Moroccan-style wicker basket was filled with slices of grilled laffa bread to scoop up the burrata with thinly sliced pear and a sprinkling of spices. The hummus, enhanced with an olive tapenade and drizzle of chili oil, also paired well with the warm laffa bread. The baba ghanoush was topped with brightly colored, marinated peppers.

We tried a few small plates including crispy salt and pepper prawns with lime, mint and a yogurt sauce. Served with their heads and tails, the texture was similar to coconut shrimp and the dish of tender, sesame-enhanced skirt steak slices was served on top of Moroccan-flavored rose harissa, grilled asparagus spears and sliced radish.

For the main dish, we chose scallops beautifully caramelized with a Moroccan spice blend called ras el hanout, a mixture usually made with a combination of cinnamon, cumin, coriander, allspice, black pepper and ginger. The sweet and sour element was completed with peppery arugula leaves and a flavorsome tomato relish with pickled golden raisins.

The last dish before dessert, sliced Maple Leaf duck breast, was served with pear cream swirled into a side of chutney-style jam made with fig and tangy mustard seeds.

For dessert, we tried the burnt honey custard with dime-size pools of orange blossom apricot sauce, halved pistachios, candied ginger and a nest of kataifi on top. Kataifi, a popular dessert made in Greece, Turkey and Middle Eastern nations, is a swirl of dough that resembles crunchy, shredded wheat that is adorned with spices.

The chocolate creme brulee is not too sweet, and it is served on a bed of puff rice pearls with a sprinkle of sea salt, a raspberry gel and a few fresh black raspberries.

To kick off 2020, Calabra is participating in Santa Monica Restaurant Week through Jan. 12. Chef Adams has prepared a special entrée, Koji-fried California quail. The dish is enhanced with a kumquat and Calabrian chile sweet and sour sauce, cilantro and mint. Calabra is also participating in dineL.A., running from Jan.17-31. The multicourse dinner menu is $29 per person. Be sure to make a reservation. $$ 700 Wilshire Blvd., Santa Monica, (310)620-9990.