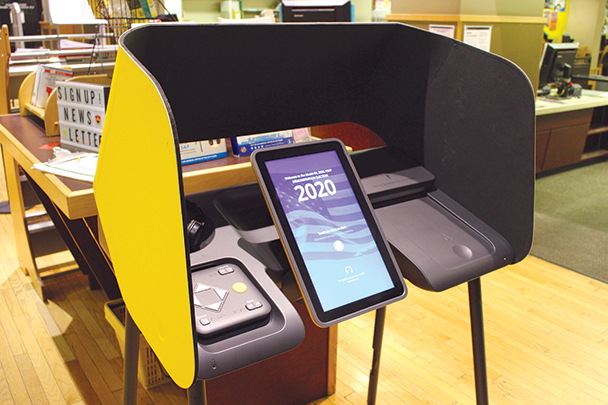 Electronically enhanced voting system VSAP will be used in elections across the county starting in March. (photo by Morgan Keith)

At a study session on Jan. 9, the Beverly Hills City Council said it will file a lawsuit against California Secretary of State Alex Padilla if remedies are not made to Los Angeles County’s new voting system prior to municipal elections on March 3.

Two council seats currently held by incumbent council members Lili Bosse and Julian Gold, who recused themselves from the item’s discussion, will be up for election. Five candidates in total – Bosse, Gold, Lori Greene Gordon, Robin Rowe and Rabbi Sidney “Simcha” Green – are vying for a seat, not including write-in candidates.

Since Beverly Hills consolidated with Los Angeles County to administer this year’s election process, a new iPad-like voting system known as Voting Solutions for All People will be used to cast votes and collect ballots.

The new system will use an electronically enhanced system to cast votes but, as currently designed, can only list up to four candidates on the screen at a time. The voter must press the “more” button to scroll down and see any additional candidates. Voters can also press “skip” without reviewing additional candidates beyond the initial screen’s view. In the State Elections Code, it is required that all candidates be listed on one page.

The city has shared concerns with L.A. County regarding the system’s inability to show more than four candidates at a time on the screen. In the City Council race, Gold will be listed fifth on the ballot and therefore has been relegated to the second screen.

“At the very least, if they’re going to leave it the way it is, they should make it so you have to get through all of the candidates listed,” Gold said. “This is set up to fail.”

In response to concerns, the county previously enhanced the “more” button directing voters to additional candidates to be featured more prominently. Still, the city said the “more” button is still not as obvious as the “skip” button.

“I think this is inherently unfair the way that it’s constituted,” Councilman Robert Wunderlich said. “It’s a clear disadvantage for someone to have to take an affirmative action to see that someone is listed and to be a possibility to vote for.”

Wunderlich said that the voting margin when he was elected to City Council was 18 votes, and if a handful of people aren’t aware of someone as a possibility, it could change the results of an election.

While Wunderlich would like to get rid of the “skip” button altogether, L.A. County has said that the State Elections Code would need to be amended in order to provide further design enhancements. The code is currently being reviewed to determine if changes can be made to the touch screen, said Huma Ahmed, city clerk for Beverly Hills.

“By making it difficult to have all the choices in front of you, you’re defeating the cornerstone of democracy,” Vice Mayor Lester Friedman said.

Mayor John Mirisch also agreed that scrapping the “skip” button would be a minor tweak rather than trying to come up with a completely new system just months before the election. The Secretary of State’s office has said this is not feasible, according to Mirisch.

“I would encourage us to start legal action because I believe this is an unfair election,” Mirisch said. “We can’t sit by idly.”

Beverly Hills has not been alone in its reservations with VSAP. City clerks from Whittier, San Gabriel and Agoura Hills have also reached out to the Secretary of State to express concerns with the new voting system. Mirisch instructed city staff to find out if other cities are interested in joining in on the potential lawsuit.

In the meantime, both Beverly Hills and L.A. County will conduct additional outreach through social media, newspaper ads, e-blasts, voting guides and more in case VSAP is not adjusted before the March 3 elections. The Secretary of State will take public comment on VSAP through Monday, Jan. 20.