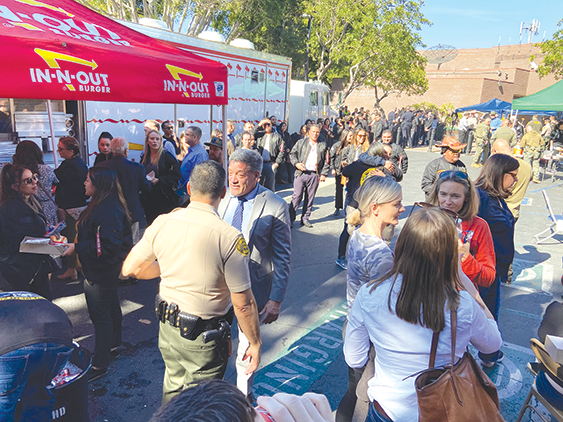 Hundreds of deputy sheriffs, police officers, West Hollywood city employees and community members attended a lunchtime benefit on Jan. 28 for West Hollywood Sheriff’s Station Det. Amber Leist, who was killed while off duty on Jan. 12 while assisting an elderly woman who fell while crossing a street in Valley Village.

Attendees purchased lunch from a truck provided by In-N-Out Burger and a barbecue station manned by celebrity chef Jet Tila and his staff. All proceeds raised will go to Leist’s family. The amount raised was not available as of press time on Wednesday.

Personnel from the sheriff’s station and other segments of the department were joined by officers from the Los Angeles Police Department, Beverly Hills Police Department, Cedars-Sinai Medical Center security staff and West Hollywood city officials. The line for lunch stretched out of the station’s parking lot onto the sidewalk along San Vicente Boulevard. The event was organized by Dep. Jerry Servin of the sheriff’s station and attorneys Shawn and Shervin Lalezary, who serve as reserve deputies at the West Hollywood Sheriff’s Station.

“The amount of support that exists is indescribable,” Servin said. “It’s good to see we are all here for each other.”

The benefit occurred three days after services for Leist were held at the Mosaic church in Hollywood. Daniel Leist, the detective’s father, said his daughter’s death has been a very emotional experience, but he is thankful for the support from the Sheriff’s Department.

“It’s like being in the circus under the big top and falling from the high wire. All of a sudden you fall and there is that feeling of loss and it’s all over, and to have that net catch you,” Leist said. “That’s what it has been like for myself, my wife and my whole family. The support from the sheriff’s department, from the top all the way to the bottom, has been incredible.”

Leist said he has received messages of support from people all over the country, and the experience has reunited him with friends and acquaintances he hadn’t seen or heard from in years.

“Sometimes, we come out of situations a little worse for the wear, but the fact is that we come out OK,” Leist added. “I am just so proud of my daughter. She really loved this community. She loved West Hollywood.”

Det. Leist was struck by a vehicle at the intersection of Whitsett Avenue and Riverside Drive in what authorities described as a tragic accident. She had been waiting in her vehicle in a turn lane and witnessed an elderly couple crossing the street. When the woman fell, Leist jumped out of her vehicle and helped them to the corner. She was struck by a car while returning to her vehicle. The driver stayed at the scene and cooperated with authorities.

Capt. Edward Ramirez, commanding officer of the West Hollywood Sheriff’s Station, said the death has deeply affected personnel, but thoughts of her vibrant and jovial personality and commitment to assisting others has helped them persevere.

“It’s absolutely impressive to see the community, to see our brothers and sisters from other agencies come out. It’s been overwhelming,” Ramirez added. “Between Amber’s passing and funeral, we had two weeks. It was in fact, a somber two weeks, but Saturday there was such a beautiful service that it really brought closure. We have a memorial wall for officers from the West Hollywood station who have lost their lives in the line of duty, and we are currently commissioning a portrait to add Amber to that wall.”

Representatives of other departments, such as Det. Brent Hopkins, of the LAPD’s Wilshire Division, said he attended because he feels a connection with others in law enforcement.

“I had the pleasure of working with Amber on a couple of cases, and she was just such an incredible person,” Hopkins said. “She was a great detective, but beyond that, she had a really warm personality, was very caring and passionate about her cases. It really hurt to lose her, and it seemed like it was the least we could do to come and pay our respects and let our partners know we are thinking of them.”

West Hollywood City Councilman John Duran was among the city officials who attended the benefit.

“It’s typical of a West Hollywood response, a community response to a tragedy. It brings everybody together,” Duran said. “Det. Leist was an extraordinary deputy sheriff. She’s going to be really missed.”

Tila said he has long respected the law enforcement community, and when he heard through social media that a benefit for Leist was being organized, he wanted to participate.

“Amber was really someone special,” Tila said. “This is our way of giving back for what LAPD and LASD do for us every day. We couldn’t be more grateful.”

The Association for Los Angeles Deputy Sheriffs and the West Hollywood Sheriff’s Station have established an account for anyone wishing to donate to the Leist family. Donations can be made through the ALADS CARES Foundation by visiting alads.org. Those who prefer to send a check should make it out to “ALADS CARES,” noting “Detective Leist” on the memo line. Checks can be mailed Attn: ALADS CARES, 2 Cupania Circle, Monterey Park, CA 91755.

Dep. Jonathan Torsney, who serves at the Palmdale Sheriff’s Station and is married to Leist’s sister, has also launched a GoFundMe page for people wishing to contribute to the family. He said approximately $24,000 has been donated to date.

“Everything helps. Any little amount is encouraged,” Torsney said, adding that anyone wishing to donate should visit gofundme.com/f/detective-amber-leist. “People can donate whatever they can. A group of kids from the Farmington, New Mexico, police explorers heard about it and donated $5 just because they wanted to help. It’s stories like that that really show people care. The support has just been amazing.”