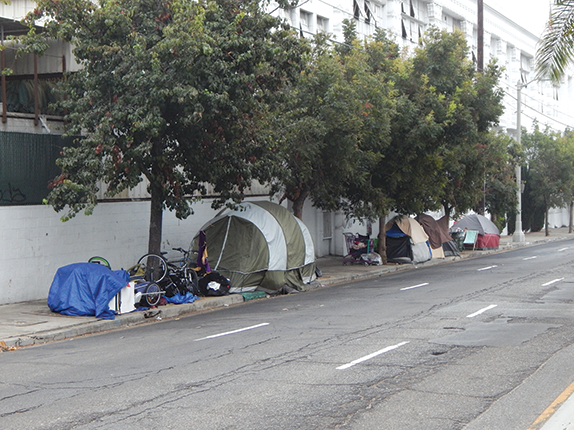 The Greater Los Angeles Homeless Count will be held next week, and local leaders are doing their part to ensure an accurate count.

The event will be held Jan. 21-23 in every Los Angeles County city except Glendale, Pasadena and Long Beach­, which conduct their own counts. Last year’s count found that homelessness drastically increased in both the city and county of Los Angeles, up by 16% and 12%, respectively.

With money from the Measure H tax and Proposition HHH bond measure and initiatives like Mayor Eric Garcetti’s A Bridge Home program, which aims to build temporary housing for people experiencing homelessness in each of Los Angeles’ 15 City Council districts, officials hope to see an improvement, though City Councilman Paul Koretz, 5th District, said the turning point is not likely to be found in the 2020 numbers.

“This year, we’ll be happy if we’re able to tread water and wind up with the same number or fewer,” Koretz said.

Koretz, who plans to participate on Jan. 22 and 23, said he is hoping for an accurate count, which can then be used to secure funding from the federal and state governments, as well as the county. That money can then be used to help augment the city’s programs to “stem the tide” of homelessness, as Southern California is still creating newly “homeless people in record numbers,” he said.

Councilman Mitch O’Farrell, 13th District, plans to participate in the homeless count in his district, which will take place on Jan. 23. O’Farrell said he participates every year and encourages others to do the same.

“As a resident of Los Angeles, I’m a big believer that we can all play a role in walking the streets, one evening a week, to put us in direct contact with the realities of homelessness,” O’Farrell said.

O’Farrell also pointed out that the numbers are crucial to securing funding, including the $1.2 billion in matching funds he is working to procure from the state government. O’Farrell said he’ll make his third trip to Sacramento in pursuit of that goal later this month.

O’Farrell said those funds can be put to great use in Los Angeles, which sees the “greatest magnitude” of the homelessness crisis that affects many cities in California.

“We’ve learned a whole lot, how to procure housing more cheaply, more innovative ways to produce that housing, such as converting existing structures. We need the whole spectrum of areas of focus dealing with people experiencing homelessness. The most important thing we can do is get beds online and have the services,” O’Farrell said.

City Councilman David Ryu, 4th District, said in a statement that he has participated in the homeless count for years, calling the event “a crucial tool in understanding the crisis of homelessness in real, human terms.”

Ryu, who plans to visit multiple neighborhoods in his district for the count, also urged volunteers to help with the count, as “one of the best things is seeing more and more Angelenos getting directly involved in this crisis of our time,” he said.

“You can’t help what you can’t see, and we all have a role to play in helping our unhoused neighbors,” Ryu said. “I welcome everyone concerned about this crisis to join the count, and take that first step toward building life-saving solutions.”

Ryu spokesman Mark Pampanin said the councilman’s offices in Hollywood and Sherman Oaks are also serving as homeless donation centers, where during business hours, those who wish to help people experiencing homelessness can drop off socks, blankets and other useful items.

“A lot of community members have come forward with donations,” Pampanin said.

West Hollywood city spokeswoman Sheri Lunn said in an email the Strategic Initiatives Division performed outreach, and the West Hollywood count is “at capacity” for volunteers. As of Jan. 15, Mayor Pro Tempore Lindsey Horvath and Councilwoman Lauren Meister are confirmed to be participating, Lunn said.

Beverly Hills spokeswoman Lauren Santillana said in an email that the city is “fully committed in terms of volunteers” for its count on Jan. 22.

As of Jan. 15, the Greater Wilshire Neighborhood Council was still seeking approximately 30 volunteers for its count on Jan. 23. For information, visit greaterwilshire.org/count.