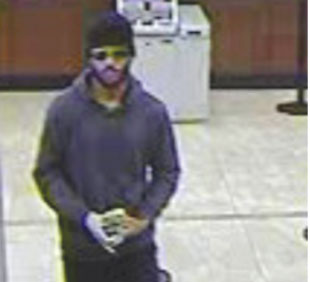 Police released a security camera image of the suspect dubbed the 20K Bandit in December. The alleged suspect was arrested on Jan. 13. (photo courtesy of the LAPD)

A male suspect who authorities dubbed the 20K Bandit was arrested on Jan. 13 after allegedly robbing a bank in the San Fernando Valley.

Arroyo said an investigation is ongoing, and police believe Brooks is also allegedly responsible for five other bank robberies, including three in West Hollywood and Hollywood, one in the Northeast Los Angeles area and another in the San Fernando Valley. He allegedly struck three times on Dec. 16 at Chase Bank, Bank of America and Wells Fargo branches on Santa Monica and Sunset boulevards in Hollywood and West Hollywood. No further information was provided about the other robberies.

FBI spokeswoman Laura Eimiller said the suspect was dubbed the 20K Bandit because he asked tellers for $20,000. In each robbery, the suspect has entered the bank branches, approached tellers and demanded cash. He alluded to having a gun but none was seen, Arroyo added. The suspect fled on foot from each location with an undisclosed amount of cash. No injuries were reported.