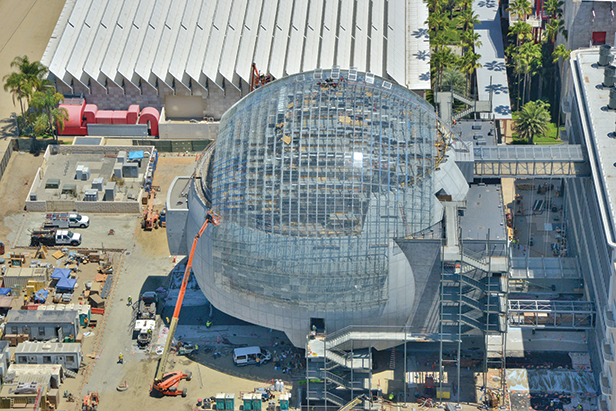 The Academy Museum of Motion Pictures’ sphere will include the 1,000-seat David Geffen Theater and the rooftop Dolby Family Terrace with sweeping views of the Hollywood Hills. (photo ©Academy Museum Foundation)

On Jan. 27, Bill Kramer, director of the Academy Museum of Motion Pictures in Los Angeles, announced that the new institution has raised more than $368 million in pledges and cash, which is 95% of its $388 million pre-opening campaign goal.

This total encompasses naming gifts, endowments, funding for education programs and operations, and other special gifts. The campaign for the Academy Museum was launched in 2012 and is headed by chair Bob Iger and co-chairs Annette Bening and Tom Hanks.

Now in the process of final exhibition design, build-out and testing, the Academy Museum is scheduled to open in 2020.

“The motion picture community and movie fans from around the world know how much the Academy Museum will mean for the global appreciation and enjoyment of the movies,” Kramer said. “We are deeply grateful to our donors and partners for their magnificent generosity. With this latest round of gifts, we are moving closer toward completing our pre-opening campaign and launching the world’s premier destination for movie lovers.”

“It’s exciting to be so close to the goal,” added Ron Meyer, chair of the Academy Museum Board of Trustees and vice chairman of NBCUniversal.

Named spaces now include the Barbra Streisand Bridge, the Steve Tisch Terrace, the East West Bank Gallery – which includes the Oscars Experience – and the Bob Iger and Willow Bay Terrace. PwC has named the exhibition on Academy Awards history, and Wendy Stark of the Fran and Ray Stark Foundation has underwritten the museum’s restaurant, for which details are still to be announced. The Ahmanson Foundation has made a significant grant toward museum construction. The Roddenberry Foundation is supporting the museum’s sustainability initiatives and naming the rideshare and school bus drop-off Roddenberry Lane.

In addition, Miky Lee/CJ Group has made a general contribution to the museum, and Richard Roth and Jeff Skoll have both created named endowments at the museum. Skoll’s gift will underpin social impact programming.